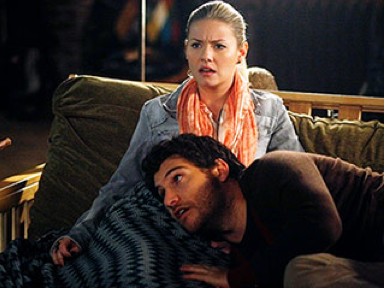 Happy Endings is not a show that is particularly about depth. The characters are one step away from cartoons. What makes the show work (and what powers similarly surface-y shows like New Girl and, to a less successful extent, 2 Broke Girls) is the show’s non-stop commitment to its characters and to jokes*.

One of the things Happy Endings is best at within this particular genre of character-generated-laughs is taking ridiculously hoary sitcom plots and making them somehow fun again. This week took one of my all-time least favorite tropes in sitcoms and romantic comedies: the woman changing the man for the better. There’s this sexism quiz you can take online that has you answer a whole bunch of questions that are meant to weed out your inner mysoginist. A lot of them are pretty obvious (like “do you think men are genetically superior to women?” and “do you think periods make women incapable of leading?”), but one of the more sinister forms of sexism, according to this test, is the “pedestal” theory. It’s somewhat related to the Manic Pixie Dream Girl Theory, whereby girls exist to help further a man’s growth. Answers related to this would be, “do you think men need women to help them grow up?” or “do you think a man without a woman is incapable of surviving?”

This relates, I swear.

The reason why the whole “women changing men” trope pisses me off so much is not because it’s completely untrue. It’s because it either turns women into a manipulative harpy systematically breaking down all the cool and unique things about a dude until he’s turned into some generic version of himself, OR it turns women into the magnanimous savior just looking to help you get over your life long addiction to video games. Either way, it’s not a great place to be in as a woman.

And you know what? I take back what I said earlier. It totally is untrue, not because nobody ever changes anybody, but because everybody changes everybody. I once went through a whole summer listening to Country Music and pretending to like Teen Mom because my awesome roommate liked those things and I wanted to try them out; and, yes, I still occasionally tear up when I think about Catelyn and Tyler finally getting to meet the daughter that they gave up for adoption. Especially when you’re young and trying to figure out who you are, the people around you help shape who you are, and the person you’re in an exclusive relationship with affects you more than anybody else- and that’s totally normal and not manipulative, harpyish, or savior-like.

So here’s where I start talking about the episode again. Happy Endings takes the hoary cliché, and rather than having Jane learn some bullshit cliché at the end about loving your partner the way he is, the show revels in the fact that its lead couple has influenced each other to become the awesome people we are now pumped to spend a half hour a week with. Penny may successfully change the brotastic guy she’s dating (a slightly wasted Dick Casablancas, aka Ryan Hansen), but ultimately he ends up with the person he wants to grow up with.

This wasn’t my all time favorite episode of Happy Endings, mainly because I don’t like episodes where I can see the ending/lesson coming the whole time, but the Dave, Max and Alex subplot stole the show for me. Max and Alex are quickly turning into my favorite comedy duo, as his slacker smart aleck act nicely offsets her ever-improving dumb blonde bit. And Dave has really found his niche in recent weeks, playing a very specific and over the top version of the character we met in the pilot. But, for the record, he looks WAY better in V-necks.

Happy Endings has been in the groove this season, by taking smart, character-specific comedy and using it to turn traditional sitcom clichés into fun (see also: the dad getting a new girlfriend cliché, or the Work Wife episode). I considered ending this with some condescending praise like “and though Happy Endings will never reach the deep analytical blah blah blah of…”, but I realized that, honestly, that kind of comedy is played out. Happy Endings does hang out comedy absurdity better than nearly any TV show on the air, and it does it with style.

*This is in contrast to a show like How I Met Your Mother or The Office, which have larger thematic goals in mind (especially in the earlier seasons of The Office) and complicated character arcs that we are supposed to follow, just as much as joke machines.