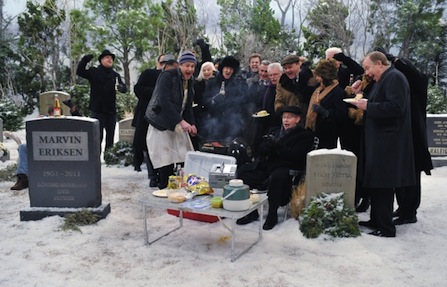 The Heart and Hind of CBS Monday

On How I Met Your Mother, Lily lamented her father’s disinterest in her pregnancy and his persistent absence throughout her life, only to have him show up on her doorstep in celebration. Marshall visited his father’s grave for some one-on-one tailgating only to have the generous spirit he inhereted from his father interfere with his plans. Pair that with a lovely early-series callback storyline for Ted and Barney that fit Robin’s so-wonderful-how-can-they-write-him-out-Kal!-Penn! boyfriend in perfectly, add Robin getting back on the air and a hearty dose of my beloved Alexis Denisof (having way too much fun as the recurring absurdity Sandy Rivers) and you’ve got a dream of an episode, even for the consistently great series.

But in 2 Broke Girls world there’s still some serious over-writing, self-satisfied grossery and impossibly broad characterizations, not to mention racial and class distinctions that are not only uninspired but actively unhelpful. Apart from the you-should-be-fired tampon rebellion, this episode consisted mostly of Max telling us how horrible a mother she had as her excuse for being insecure and snippy. Apparently this terrible mother is also the reason that she is unable to bake cupcakes without using the boxed mix, which she has clearly never tried because Google could easily give her instructions. So the cupcake business at the centre of the show is relying on a baker who bakes from a box; which, by the way, is the less appetizing, less healthy, far more expensive approach that would in a million years never fly in actual business practice- a point I’m sure the far-superior character Caroline would have pointed out had she not been distracted by a silly story about couponing that was apparently supposed to plant the idea that her father’s sneaky financial ways may be hereditary (cause that’s totally how that works). Oleg’s “I like to be the hero” line was pretty much the only good thing about the episode. Could we have the cute artist guy back please? And maybe something for Caroline to do apart from listen to Max whine and pretend that coupons are more effective than they actually are. And while we’re at it, let’s develop Han, Earl and Oleg into something other than cultural stereotypes and try letting Max be a real person instead of a quote machine.