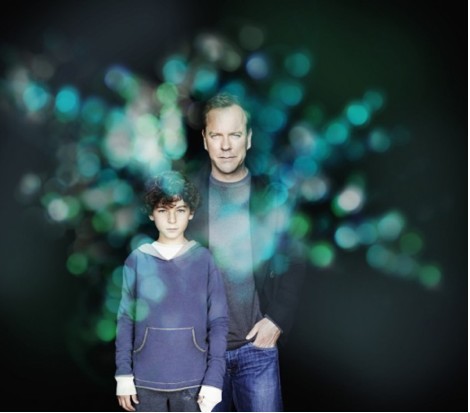 Touch, Kiefer Sutherland’s new pilot about to air on Fox, is described as a “drama that blends science and spirituality to explore the hidden connections which bind together all of humanity,” by Fox Publicity. Needless to say, 24 this isn’t. At the same time, the drama does focus on Kiefer Sutherland as a man needing to stop bad events from happening before they occur. It’s just that in this case, rather than torturing people to get information, Kiefer finds out that his mute, autistic son can actually predict the future. The show is created by Tim Kring (Heroes).

On a rainy Los Angeles morning, Kiefer Sutherland participated in a conference call all about his upcoming drama. These are the highlights:

* “ON HOW THIS IS LIKE 24: “There’s something interesting, because obviously this is very different from 24, yet there’s a real similar through-line in the character of the man… Jack Bauer… would never win completely. And this guy is never going to win, either. He’s never going to have the quintessential relationship of the father to the son. And yet he perseveres.”

Throughout the conference, Sutherland made it obvious that it was this emotional through-line of an incredibly lonely man trying to connect with and understand his son that drew him to the project and that keeps him interested in it.

* ON THE SHOW’S SPIRITUALITY: “I absolutely think it does [work this connectedly]… Someone who’s late for a bus one day, all of a sudden they’re not on the bus, and they have to take a bus… there is a cause and effect, a ripple effect, of everything everyone does… I do believe very solemnly that all of us and all of the other things in the context of our planet with mother nature, all of these things obviously have a profound effect. And it was really interesting to do a show that focused on that.”

The show itself is based on a Chinese Fable known as The Red Thread. This fable postulates that all the people one is going to meet in one’s life are all connected by a Red Thread, which can be bent and flexed but can not be broken. Somehow, in the world of Touch, this thread has been broken, and its partially the responsibility of Martin (Sutherland) and his son Jake to fix this.

* ON FOLLOWING UP WITH 24: “I had an unbelievable experience on 24. We shot 198 episodes, and I was as excited about the 198th as the first. And I had a great relationship with FOX. That combined with this script, it wasn’t even really a choice anymore. And I remember thinking about it really strongly while crossing the street in New York, and I remember saying “if we don’t do this, how will we feel in September watching it?… I didn’t want to be sitting there watching this fantastic show in September, knowing I had the possibility to be a part of this.”

Sutherland really did sound this energized and excited to be a part of the project. Maybe it’s because he would actually get to change his clothes throughout each season this time?

* GENRE: “I’ve always felt that this was a drama. We’re embarking on the journey of a father trying to connect with his son, and try to have as normal a relationship as he can, under the circumstances. And that will always be at the heart of the show… Certainly as the show has developed… there’s an aspect of it that I would characterize as a thriller, suspense, and certainly the science fiction aspect as well, but at its heart it is a drama.”

This, to me, is the hardest selling point of the show. It takes pretty big leap on the part of the audience to buy into the whole autistic kid is really an advanced form of life conceit, especially given that as Sutherland says it is a “procedural show… [where] each individual episode is its own individual entity,” rather than a metaphysical analysis type of show.

* David Mazouz, who plays Jake, got high praise from Sutherland. It sounds like the kid has a huge role to take on, having to convince people to get behind a character that barely communicates.

ON David: “He’s an amazing young actor and young man.  He has very limited physical response to anything that I do, he doesn’t talk, and yet I can feel his presence. I can always sense that he’s listening. He was the first boy out of about 25 young people that I read with, and I remember thinking… wow, this kid is amazing, if the other kids are like this we’re going to find an amazing kid… but there was something really special about David… I read with close to 30 kids, and I was finally like, can you guys just hire the first kid [David]?

Check out the trailer for Touch here.