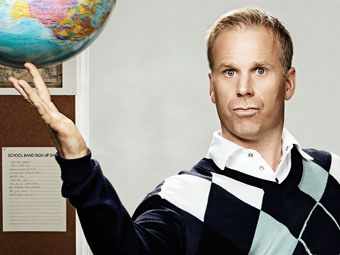 The series is created by, written by and stars Gerry Dee- an Ontario comedian, ne Gerard Donoghue, whose IMDB page contains information about his golf handicap and his history as a phys ed teacher. The more I learn about Mr. Gerry Dee, the more I think Mr. Gerry D (short for Duncan) might be an alter ego more than a character- we might have a Colbert situation on our hands.

The show itself should be right up my alley with its smart-kid setting, and it’s not completely off base, but Mr. D needs a serious tune-up. Imagine if Michael Scott was the only developed character on The Office– that’s the overwhelming craziness of Mr. D.

Only 22 minutes in, the show has a ton of potential- the premise is open to countless stories, the school big enough to house dozens of great characters, the lead capable of growing in lots of interesting directions- but the supporting characters NEED to be developed, the writing needs to be sharpened and Mr. D needs to find some grounding (and maybe a little backstory) before the show can live up to its potential.

On the CBC, paired with Little Mosque’s final season, Mr. D could be exactly the show I’ve been waiting for out of Canada, but it could also be an extremely annoying and short-lived experiment in silliness.