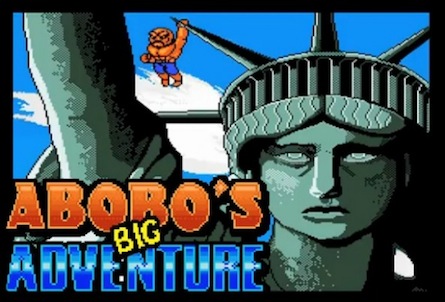 I recently said that some older games have not withstood the test of time very well. Abobo’s Big Adventure has shown us that fan tributes to older games are still alive, kicking, and knocking the heads off random passerby and eating them.

Abobo’s Big Adventure is a flash game made by taking the different scenarios of a varied assortment of NES games and cramming them together into a box with a club. It sounds like a bad thing but I assure you it isn’t. I was unsure how I’d feel about this raunchy and inappropriately hilarious homage to the NES era, but after playing through the Double Dragon goomba stomping and nostalgic and slightly inappropriate Zelda dungeon, I was hooked on its charming simplicity. The controls mimic the classic game setup, with buttons to move and to attack, without any complicated and extensive button combinations. I don’t usually play games on my computer, but the setup was still intuitive. Villains and scenes from Mario, Megaman, and Zelda all come together to make an addicting crossover nothing short of hilarious, all with a new twist. The game still seems to retain the harsh difficulty from the NES era. Since there wasn’t necessarily an option for multiple endings, games had to be harder in order to prolong their gaming life. If a game was easy enough that it could be beaten in an hour, people may question their desire to play the game more and get better at it. Abobo provides a good challenge in multiple mediums; with Mega Man 2, The Legend of Zelda, Super Mario Bros., Contra, Balloon Fight, Double Dragon, Kung Fu, and Pro Wrestling being the driving forces behind the gameplay engines for Abobo.

The game is free, fun, and mind numbingly addicting, with my only gripe being the need to redo the entire Zelda dungeon if I die while exploring. Other than that, it’s a perfect way to kill time on the computer.  Give it a try at http://abobosbigadventure.com/fullgame.php, you won’t regret it.