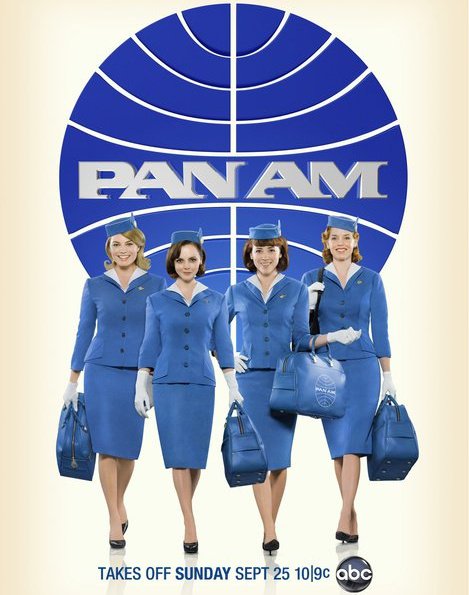 Watch Pan Am Tonight at 10pm on ABC- PLEASE

As I’ve said before, this was a great season for new shows, but I’ve loved none so much as I’ve grown to love Pan Am. There hasn’t been a new drama this well written or an ensemble this talented since the premiere of Parenthood almost 2 years ago, and the last time I saw a network show as beautifully designed or directed was Lost, back in 2004. What could have easily been frivolous 60s exploitation full of mile-high, low-stakes interpersonal drama is instead a fascinating, character-centered global adventure that defies genres as well as it does stereotypes.

The women of Pan Am are smart and bold and diverse, despite their regulation looks and pristine uniforms. Kate, who quickly became my favourite, is a wonderfully sure-footed creature, played with fantastic complexity by Kelli Garner. At first I thought the storyline about her acting as a messenger for the US Government was a little out there, but so far it’s been handled with just enough gravitas to make me buy it while generating some superb moments for Garner to showcase her incredible depth as an actress. Forced to be a black sheep by her simple desire for independence, the moments when her handlers call on Kate to obey and not question bring up incredible conflict in the uber-capable stewardess.

Kate’s sister Laura, her demure counterpoint played by the stunningly beautiful Margot Robbie, was less of an immediate favourite. Somewhat whiny and certainly the weakest of the strong-willed bunch, Laura’s passive attitude and Kate’s constant need to rescue her was growing tiresome until episode 7, “Truth or Dare”. Now living with Maggie, Laura had escaped her sister’s watchful eyes and proved that Kate’s mothering was more protective instincts than necessity. In “Truth or Dare” Laura, having finally closed the door on her almost-marriage and put her foot down with flirtatious first mate Ted, began to fall for a charming sailor on board a special flight. Said entrancing soldier was played by the underrated awesomeness that is Gaius Charles (Friday Night Lights) and the ensuing socio-political controversy threw Laura in above her head. What was fascinating about the story was less Laura’s finally taking a stand for something and more what it revealed about her before she took that stand. The episode explored Laura’s follower nature, her embedded prejudice, her untrusting instincts- facts she’s forced to confront when attracted to a black man, told to kick him out of her apartment, threatened for being with him in public. It was a watershed moment for her, and the moment when I finally understood who she was, and thus began to appreciate her.

Christina Ricci’s political bohemian Maggie was supposed to be the breakout character of the series (or so the ad campaign led me to believe), but so far she’s fallen to the back of the pack behind the Cameron sisters and their scene stealing colleague Colette (the sensational Karine Vanasse). At first, the addition of a random foreign flight attendant seemed arbitrary at worst, an attempt to push the “these women all must be biligual and cultured” point at best. But when the flight crew landed for an episode 3 layover in Berlin, Colette’s French upbringing could not have proven less arbitrary (she had a part to play in the previous episode’s Paris trip too, but Berlin is where she really shone). Something that most American-embedded, 60s-set narratives can somehow ignore (or use for a convenient “I was a soldier once” father story) is the fact that adult characters in their story will all have lived through the second world war. As children living in the USA, that’s something, but not a lot, to Kate, Laura, Maggie and the boys, but to Colette, that’s life-shaping and unignorable. Touching down in Germany, soft-spoken, even-tempered and well-mannered Colette seemed to lose her careful control of whatever it is that ties her all together. Her childhood in Nazi-occupied France and the post-traumatic desperate anger she’ll never really get rid of showed itself in outbursts, directed at the unfortunate innocent but still representative. As Colette grappled with her own impulses, Vanasse’s singular talent was clear, revealing all the cracks that were so carefully veneered when everywhere else.

The temptation would be to claim Pan Am as a feminist show, a showcase for smart and sophisticated female characters who, despite the objectification they endure in their job (a tragic but true product of their time period), have taken their lives in their own hands and set out for adventures of the independent kind. But what Pan Am doesn’t do is trivialize (or vilify) its men. Dean (a chisel-faced Mike Vogel), the newly minted pilot, is still a bit unexplored, his principal storylines all resting on romantic entanglements with a few shining moments of uncertain heroics thrown in. But the first mate Ted (former Scrubs standout Michael Mosley), who began the show as a comic horndog sidekick, has quickly stepped it up. In a recent episode, the fiercely sarcastic Maggie remarked “Ted, I disagree with your politics, your attitude towards women, and, well, you as a person in general. But you show up, you come through and not everyone does that, so thank you”, pretty much nailing Ted’s character. I’m a sucker for the seemingly selfish character who always comes through (let’s call the prototype a Karev) and Ted has sneakily become that guy for not only the women, but all the characters of Pan Am (in fact, his resentment of come loyalty to Dean has been one of my favourite arcs to watch). As played by the nonchalantly goofy Mosley, Ted’s an easy character to overlook, which is exactly how he’s shown how great he is.

Pan Am is in every way just really great. It mines wonderfully honest character stories out of a premise that could easily have limited them and uses said premise to open itself up to possibilities no other show has (in episode 8, a heart attack on board led to an emergency landing in a politically fraught Haiti- there was a brilliant and high-stakes story there for every single character but the drama was still rooted in a believable plot). That’s a show worth saving, but with ABC limiting its season one order to 13 episodes, the fact that the network still claims it’s in the running for a second season has become laughable (literally, people are laughing). These networks have let me down time and time again, especially ABC who once ruled the airwaves with no fewer than 10 intelligent scripted dramas and now has almost none. It’s time for them to realize that ratings can’t and don’t measure value and that great shows need time to be known as great.

But in the meantime, I’m begging you, tune in to Pan Am tonight at 10pm on ABC, it may be one of the last times you can.

PS: ABC execs, if you’re reading this, Once Upon a Time is horrible, kill that if you really need blood.