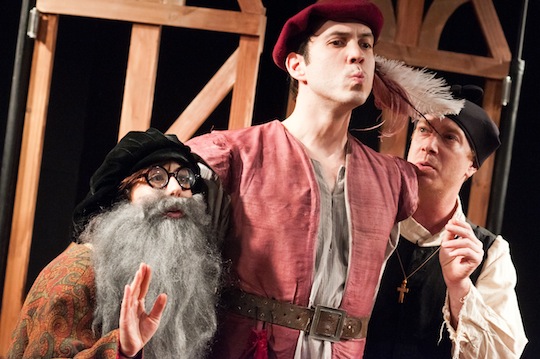 Let me start off by saying this: I have nothing to say about the text of this play. I refuse to get involved in that. I could probably spend this entire article writing about how little I actually like Merry Wives, or how disappointed I am in William for writing it, or the fact that I think it’s clearly a sell out, or any number of other things, but that would only lead to the following results: 1. I would make myself angry, and 2. you would all think I’m some sort of dirty theater hipster. Therefore, I will ignore all of that.

Anyway, The Actor’s Shakespeare Project is one of my favorite Boston theatre troupes, and they certainly don’t fail to deliver in their presentation of  Merry Wives. Full of music and fun, the production offers a wonderful evening out. Fast paced, and with an exceptional cast led by the always outstanding Bill Barclay as both Slender and Fenton, Merry Wives is fun, plain and simple. Is it earth shattering theater that made me reevaluate who I am as a human being? No. But it’s a lot of fun, and had me laughing the whole way through.

Particularly enjoyable is the effort of the actors to get the audience involved in the show. Transitions between scenes and acts are covered by music and singing- the actors leading the audience in a singalong that you can’t help but participate in with a smile on your face.

The production is also rife with allusions to past ASP work, as this play about Falstaff features both Bill Barclay and Michael Forden Walker (Master Ford/Simple), who starred together in last season’s Henry IV pts. 1&2 (as Prince Hal and Poins, respectively).

All in all, The ASP’s Merry Wives is a wonderfully fun way to spend an evening at the theater, and certainly lived up to my expectations for one of my favorite troupes. I can’t wait to see what they do with their next project: Medea.