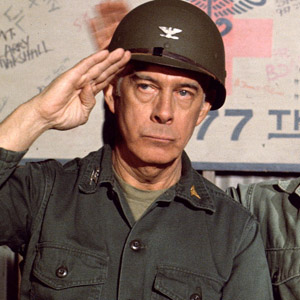 Actor Harry Morgan died this week at his home in LA after battling pneumonia.

The beloved star lived to be 96 years old in a life filled with decades of first-rate television and film roles like those he played on Dragnet and MASH, 2 landmark series.

Morgan’s portrayal of Col. Sherman T. Potter in MASH was, to me, a backbone of the groundbreaking series’ best years. Replacing the endearingly goofy Col. Blake, Potter was a highly competent and golden-heartedly serious man. He grounded the series in ways it so desperately needed and Morgan’s dry humour served as a perfect counterpoint to Hawkeye and BJ’s antics. Col. Potter was one TV’s greatest characters and the man who gave him life, Harry Morgan, will be sorely missed.

As a final farewell, here’s a last look at one of Morgan’s most famous MASH moments.