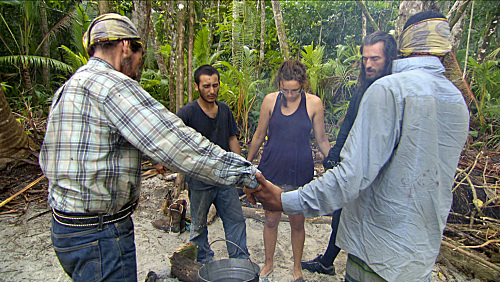 Onwards Toward the Finale

This has been a mighty weird season of Survivor. After last year’s dual narrative of redemption island’s Christ-like figure in Matt and the main island’s godfather figure in Rob (and the awesome landslide victory in favour of manipulation and mind control), I was thinking it might be time to put Jesus away for awhile, maybe come to terms with the fact that God has no interest in reality TV. Not so fast. This thing is called Redemption Island and these folks are middle Americans, ain’t nothin’ gonna stop the religious crazy train currently off the rails somewhere in the South Pacific. And the producers are loving it, Jeff’s soaking it up and by gosh it makes for some compelling drama, even if it makes me worry a little for the well-being of the players (there’s more than one this year who honestly believes God speaks directly to them, I fear it’s a tumor).

Here’s the deal: this year’s 2 tribes were each assigned a past player. Savaii got Ozzy, famous for his survival and competition skills and for particularly bad social and strategic game. The issue over there was that new players don’t know how to not follow the lead of the veteran and Ozzy should not be left in charge of tribal tone. The group quickly divided along cool-kid lines and alliances of perceived strength were formed. With the exception of a single move (Jim ousting Ozzy’s right hand woman), it was a paint-by-numbers tribe following a leader uninterested in leading. The tribe’s best asset, Dawn, fell quickly by the wayside because the numbers lined up against her age early; and the tribe’s best strategist, Jim, was sidelined because he was a bit too much of a jerk to convince the others that they should follow him instead of trying to force Ozzy to step up. The leadership failure brought Savaii down when the merge happened and the weak were still looking for somewhere to turn. Low man on the totem pole, Cochran, flipped and the rest of Savaii was history. Save Ozzy, the man for whom Redemption Island was invented as a twist; it’s a haven for a self-sufficient competition-winner with no head for the game. There was no way for Ozzy to win Survivor, so the game changed for him, and now he might just take it.

The opposite phenomenon happened on the other tribe, Upolu. While Savaii had a universally liked laiser-faire monkeyman as their veteran player, Upolu was handed one of the series’ most polarizing figures: Coach. There are many tribes which would have kicked Coach off no questions asked on day one. But he struck gold with Upolu, landing on a tribe with overwhelming religious conviction where the loudest voice of the lot (Brandon’s) was crazier than his own. Coach’s problem has always been that he’s a born leader on tribes that had no interest in following him, but this crowd nuzzled right in to his welcoming arms after less than a day of the cold shoulder. Most of them appreciated Coach’s oddly intense moral code and zen religiosity, and those who didn’t just happened to be off-putting loudmouths (and poor Mikayla, whom the world seemed to line up against; there was nothing she could do). With people finally listening to him, Coach was able to unleash the incredible charm and leadership he’s always tried to show, leading the tightest-knit tribe since, well, since Rob’s “family” last season, convincing Cochran to flip with some basic understanding of human psychology and a whole lot of genuine warmth. Coach is being a little more upfront about his strategies, but he’s running the ship with an awfully familiar tightness, as though he’s learned his lesson by watching season 22’s perfect game. He’s got these guys on a string and every single attempt one of them makes to move in another direction mysteriously fails (come on Albert, why can’t you get anything done?). The constant praying and absurd statements like “it’s the will of God, go win at redemption” may be undermining the audience’s opinion of what’s actually an incredibly well-played game (and could cost him dearly with the jury), but in the meantime, Coach is getting things done on that island; he may be claiming (and actually believe) God’s behind it all (God does not care about Survivor, let’s get that straight) but with this tribe in particular, that’s actually working out pretty well for Coach.

Which brings us to the final 5 and tonight’s massive craziness. The final 5 was Coach’s day-one alliance made up of himself, 2 loony religious die-hards and 2 people who should’ve flipped weeks ago. Alas, no one seems to want to flip on Coach, they’ve all got it in their heads that they can beat him in the finale. Now, I know most juries are bitter groups totally lacking in perspective, but the only person in the final 7 (let alone 5) who, might be able to take down Coach in a realistic finale would be Sophie. Nobody else has done anything (and this from someone who honestly believes Natalie White deserved to win Samoa). I think, just to be safe, Coach should’ve saved Brandon this week, taken that crazy pants with him, with Rick, to the end to claim his prize. Actually, Brandon shouldn’t have needed saving at all, the little weirdo won immunity then gave it away because Jesus told him to save Albert. Then Jesus told Coach to vote out his closest ally (dude, Jesus likes allies, the reason you had the name “Brandon” in your head is because that’s who YOU wanted to vote out, from back before you were “pissed but at peace” with him winning immunity. YOU, not Jesus, you made that call). So, you know, one of the dumber moves there’s ever been, but also hilarious, and somehow appropriate for this lot. Brandon goes to redemption island where Ozzy’s been feeding, sleeping and training to bring him down; Coach, Sophie, Albert and Rick move on as the final four. As far as we know, Coach has the stupid idea that he wants to bring Ozzy with him to the finale (ensuring himself the loss), but he has the hidden idol and he has the tribe in his pocket. It would take an act of God to hurt his momentum to the finale now (pun intended).

So, moving forward towards Sunday’s 3 hour finale+reunion extravaganza, here’s what I want:

– I want Brandon to take Ozzy out on Redemption (not likely), sending him to the jury where Coach can’t make the mistake of allying with him.

– I want Albert to succeed in convincing the others to vote out Sophie, the most likely player to win the game having done very little to earn it (2 immunity wins is not solid Survivor-playing, you can nail this game without a single immunity, but Jeff doesn’t hand out strategy as a prize to the best plate stacker)

– I want the others to then vote out Albert. I don’t want her to win but Sophie’s right, he does think he’s smarter than he is. I’ve always liked Albert and I was glad to see him saved this week, but a great strategist would’ve found a way to implement at least one of those many plans he’s hatched.

– I want a finale of Coach-Rick-Brandon where the jury gives it to the guy who controlled the game. Pipe dream, I know, especially after Rob’s win last year, but it’s what I want. Rob taught us that the way to win is to take the crazy (Philip, Brandon) and the useless (Natalie, Rick) with you to the end. If Brandon pulls it out on redemption, Coach might be able to do just that (again, not likely, but it’s nice to dream).

Meanwhile, I may not have someone I truly love still in the game this season (I’m very fond of Coach, but sometimes the God talk crosses out of admirable and into delusional territory) but I’m more than happy to amuse myself watching the jury’s bemused expressions as these lunatics air their dirty laundry. Jim is a master of silent sarcastic incredulity- gee, I’d really like to see him return for another season, see what that excellent mind of his can do with a little more social self-awareness.

In “We Love Jeff Probst” news, anyone wondering who the best host on TV is needed to be watching this tribal council even more than all his other brilliant mediation efforts. Brandon gives up his immunity necklace then seems to regret it, so what does Jeff do? He corners Albert in his 400th lie of the episode, forcing him to worm his way out of giving the necklace back to Brandon as a show of Christian good faith. Ha! The necklace falling from Albert’s neck just as Probst snuffs Brandon’s torch was just the icing on the cake. Man, no one can meld crazy good drama out of basic crazy like Jeff Probst.

See you Sunday, Jeff (still my favourite Survivor), and congrats on your wedding!