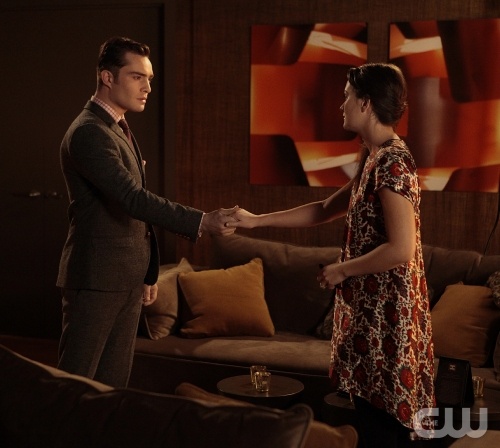 This week’s Gossip Girl brought a rocky half season to a close as the primetime soap gears up for its hundredth episode this spring.

It’s been a rough couple months on the upper east side.

The boring story about unlikable actress Ivy defrauding the family into thinking she’s long-lost cousin Charlie has done nothing but make the Rhodes clan look gullible and silly. Meanwhile, Nate’s awkward fight against nepotism and corresponding (read: ironic) meteoric rise to the position of editor-in-chief at new tabloid The Spectator hasn’t been much more interesting, though I do love Nate and it’s nice to see the writers at least try to give him a story that’s not just him sleeping with cougars (he did that too, with boring-as-brick shady villainess Elizabeth Hurley, but at least that wasn’t ALL he was doing).

I’ve been semi-interested in Serena’s work in the film business, mostly in how it affected Dan’s story this season, bizarrely the most interesting of the lot. Dan’s usually the character I find the least engaging (that’s between him and the other leads, sans Jenny, Vanessa, Georgina, etc…, all of whom are horrid), but his “accidentally published” satire of his life and friends has had something interesting to say about the role of the outsider and how we frame ourselves within our life story. Some of the details of the arc were a little dumb (who complains that the book they wrote when they were 20 was on the New York Times Bestseller List for ONLY a week?!) and the dramatic hurt his friends and family felt seemed to go away pretty quickly, but the story in general proved fun and moved the characters well. The self-analysis it’s sparked in Dan and Serena also seems to be helpful, and I’m loving the idea that Serena’s jealousy of Blair stemmed from her feeling replaced as “the star of Dan’s book”- it’s so very narcissistically her.

As for the series’ star characters, Blair and Chuck have been going around in circles avoiding the conclusion we’ve all known for years they would reach. At the moment, Blair’s engaged to the prince of Monaco, Louis- a drip of a character with little aside from a title to make him interesting enough for the dynamic and intelligent Ms. Waldorf- and she’s pregnant with his kid (who, until this week, I was quite convinced would turn out to be Chuck’s after all, apparently not). There were some weeks of mildly entertaining filler regarding royal custom and Louis’ family’s completely founded concerns about Blair turning her back on their traditions, insisting on having everything her way, keeping Louis from the country he’s supposed to rule and eventually leaving him heartbroken (again, COMPLETELY FOUNDED, how dare the show frame them as oppressive lunatics, princess Beatrice was maybe a little overboard but Blair was obviously going to do ALL THOSE THINGS). Once all that was sorted out, however, there were a couple weeks in which Louis was a snotball then Blair realized (Again!) that she really loves Chuck (forgetting that the last time she broke up with him it was something about forging her own career path and being her own person before being with Chuck- oh well, new season, new priorities). So this week Dan did the right thing in putting the girl he (apparently) loves ahead of his own feelings and set up a meeting between the two. Then they were chased by the paparazzi in a Diana homage that walked the line of hitting a little too close to home and got in a dramatic car crash.

So now the characters are all gathered at the hospital. Charlie (Ivy), who sent out the Gossip Girl blast telling reporters where Blair and Chuck were, is finally leaving and Blair is awake. We don’t know what happened to Chuck yet but there’s no way in hell the show kills off a hit character (or wastes the sardonic treasure that is Ed Westwick), so he’s probably in a coma for maximum 2 weeks when we return in January. Oh, and that baby is definitely gone. TV likes to live in a world where the number of miscarriages is 400x higher than in life, it makes for convenient storytelling that allows the drama (and convenient “I have to stay with Louis” instinct) of pregnancy without having to deal with controversy (abortion), a whole 9 months of fat and sober characters (adoption), or, god forbid, an actual kid to write around (motherhood). It’s not fair, it’s sadder than the show will surely address, but there’s simply no way that baby made it through the car crash. Chuck, on the other hand, absolutely made it through- so stop fretting.

The episode ended with a highly ambiguous phone call between Chuck’s recurring villain uncle Jack and the horrible why-is-she-still-here Diana (Hurley) in which we learn very little except that they know each other and are up to something. It also seems as if Nate were targeted (the car Chuck and Blair got into, which was possibly meant for Nate, was leaking, though it never caught on fire) and he might be in danger too.

You know you love it. Til January, XOXO.

PS: Penn, your acting’s better than ever, but please, dude, Cut Your Hair! Love, My TV.