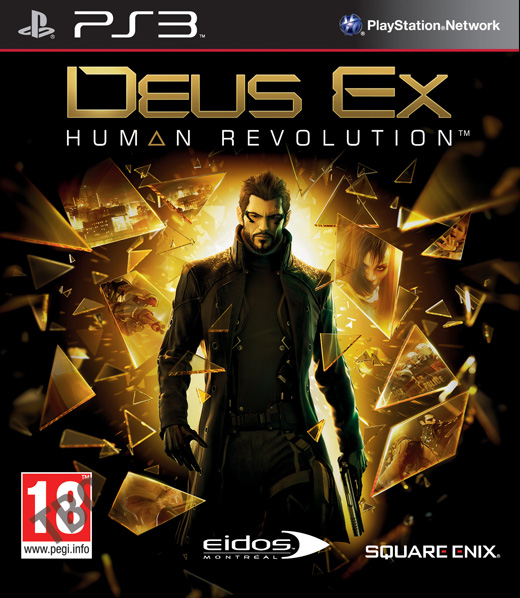 When I was a kid, I used to love watching Blade Runner on my old VHS player. I’d come home from school, work on a Gundam model, and immerse myself in 2 hours of sci-fi bliss. The dystopian noir future of mankind was bleak, but hey, it had Harrison Ford, which was enough for me. Flying cars, robots, and the occasional synthetic femme fatale were an added bonus. Many years later, I came across Deus Ex: Human Revolution. It was remarkable how similar the two felt, with their gritty aesthetic and sharp dialogue. In Deus Ex, I found a way back into the wonder I had for science fiction.

Deus Ex: Human Revolution is a prequel to Deus Ex for the PC, which was released in 2000. It follows the story of Adam Jensen, the security chief for Sarif Industries, a company specializing in augmentation research. Augmentations are pretty much exactly what they sound like: mechanical additions to your body that result in heightened strength, reflexes, vision, etc. You progress through the game with an iron determination to find out who took everything away from you. After the introductory scenes, you are placed in full control of Adam Jensen’s decisions and movements. This is where you start to get a feel for the sheer depth of Human Revolution. For example, scattered throughout the game are a series of “e-books” that serve to further flesh out the story of Deus Ex. The e-books range from scientific journals to humanist propaganda to, rather humorously, cybernetic romance novels. (A strange combination of Terminator and Twilight comes to mind). It adds a level of intimacy to Deus Ex that makes it really feel as if you are part of another universe that is packed to the brim with snippets of real life. The amount of text may seem daunting at first, but it doesn’t require meticulous scrutiny. It’s there mainly to give you a feel for where you are in the world and what you need to do, and so all of the additional text mainly serves as a treat for those looking to get the most out of their gaming experience. This, coupled with several in-depth side-quests, ensures that there is plenty of material to keep you engrossed in the Deus Ex Universe.

The main plot line moves at a steady pace, allowing you ample time and opportunity to complete those very rewarding side-quests. The experience you gain from them is essential for earning upgrades for your augmentations. Trust me, the game gets much easier the more upgrades you have. Whether it be dealing with crooked cops or bailing Chinese escorts out of trouble, Jensen gets around and will need all the help he can get. Augmentations can make you run faster, endure more damage, and even make you more charming. No, really, you can actually upgrade your ability to charm people. Jensen will do a bit of travelling as well; locales include Detroit, China, and even Canada. (I see what you did there, Eidos Montreal). Each area has its own flavor and style, although some do start to look the same after awhile. (It must be hard to feng-shui in a dystopian vein). Similarities apply mostly to building interiors, with the many corridors of many, many buildings blending together after a while. Deus Ex more than makes up for repetitiveness in the game by providing exquisitely detailed environments. I could even read the post-it notes on a Sarif employee’s desk. Several hours of my gameplay consisted of me walking around Hengsha and Detroit, looking in shop windows and admiring everything from people’s augmentations to breakdancing punks. As a result, Deus Ex’s pervasive and intensive atmosphere manages to keep you enthralled with Jensen’s gritty dealings, which brings me to my favorite part of the story dynamic.

Morality plays a HUGE role in Deus Ex, and the angels and demons perched on my shoulders love that it does. Although it might seem trite, actions in the game have distinctive consequences: what you do may come back to haunt you or it may come back to help you. Thinking back to older RPGs that I’ve played, it was necessary for me to kill monsters in order to get stronger, and altercations with other characters usually had only one possible outcome. There was no room for arguments a lot of the time, and I went along in the direction the game wanted me to go. This is not the case in Deus Ex. For example, the game gives you the choice to either kill enemy combatants or simply stun them, a choice that actually carries significant weight as you move forward. You can choose to let characters live, and they may help you later on, or you can kill them and ensure they never turn on you. The best thing is that this morality isn’t simply a combat mechanic. The way in which conversations play out with your friends and enemies hinges upon your ability to interpret their words and actions. Deus Ex presents you with moral dilemmas and gives you no one definitive way to react to them. The game forces you to rely on your own moral compass, to come to your own decisions, which may not necessarily be the right ones. This gives the game immense replay value, as you have the chance to play through once in a morally conscious way, and then let your darker side out to play the next time. Even better is the opportunity to do all the things in-between.

Unfortunately, Deus Ex messes up its own formula in its boss battles. Unlike nearly everything else in the game, there is only one way to deal with a boss fight, and that is to kill whoever you’re fighting. There are no options for a non-lethal takedown, and no way to circumvent the fight itself. Freedom of choice is kicked out the window as you have no choice but to follow a scripted event in the game. Fortunately, these are only minor deviations and don’t spoil the rest of the gameplay. The tension of trying to figure out the right course of action is alive and well, and will have you questioning your own sense of right and wrong in the days to come.

Characters also provide you with just as much insight into the world of Deus Ex as any of the e-books could. Each and every one has something to share with you, whether it’s their opinion on current events or their desire to get to know Jensen a little more “personally”. What’s even better is that the topics they talk about parallel ideas that we deal with in our society. How we deal with people who are different, whether it be in terms of race, political opinion, gender, and even intelligence, Deus Ex pokes and prods our brains to stimulate what we feel on these subjects. Do you resent those smarter than you? Do you pity those who have less than you do? Do you want to be an advocate of justice? Or do you want to let loose? Your actions in the game will not only help you get to know what makes Jensen tick, they’ll open your eyes to how you yourself think.

Gameplay-wise, Deus Ex feels like a very solid plot-driven first-person shooter. Camera sensitivity is comfortable, and allows for a quick and effective surveillance of your surroundings, and, like I mentioned before, you’re going to want to look everywhere. Stealth is of extreme importance in this game, unless you’re the type to go in guns blazing. Some upgrades mask any sound you may make, or even make you completely invisible. On the flip side, there are also upgrades that increase your damage output and attack capabilities, ensuring there’s something for all playing styles. The environment is very interactive in allowing you to hide behind walls and debris, or move crates into strategically beneficial positions. Security cameras have tolerable fields of vision and give you room for error by not setting the alarm off if they just get a glimpse of you. Guards generally have competent AI’s and basic planning is necessary in order to take them down in the most effective way. Consequences for being seen can oftentimes be brutal, but frequent auto-save checkpoints keep repeated death from being too unmanageable. One thing that did frustrate me though was the energy-bar mechanic. I understand that doing your augmented actions requires a certain amount of energy, but the absence of a basic melee attack that doesn’t require an energy bar is baffling. For instance, I have no energy bars left and I have the ability to either jump nine feet into the air or sprint for twenty seconds, but I can’t muster up the strength to punch someone in the face who’s holding me at gunpoint. Hmm. Other than that, the energy bar is a good way of limiting the player, making sure that they can’t abuse the powers of their augmentations.

Story: 9.5/10 – I can’t give this game the 10 that I wanted to mostly because of the ending. While not awful, it’s completely unsatisfying. The best way I can describe it is that the ending should be an epilogue. It’s meaningful, but it doesn’t wrap up the game in a nice package. It left it feeling unfinished.

Graphics: 9/10 – The environments are beautiful, and the attention to detail is inspiring. The character models are original and detailed, but there are some definite repletion of designs and backgrounds every once in a while.

Sound: 8.5/10 – While I really enjoyed the sound, none of the music is extremely memorable. It provides good ambiance, but there’s nothing I could hum or whistle or get stuck in my head.

Gameplay: 9/10 –Tight, responsive, and makes excellent use of camera angles when in stealth modes. Still, being unable to perform any sort of melee attack without at least one full energy bar is frustrating.

Replay Value: 9.5/10 – A multitude of choice allows players to play through the game choosing a seemingly endless combination of responses to events. The only thing keeping me from playing through it multiple times is the less-than-stellar ending.

If you like an engaging story that not only tests your reflexes, but your morality as well, then treat yourself to this game, you won’t regret it.