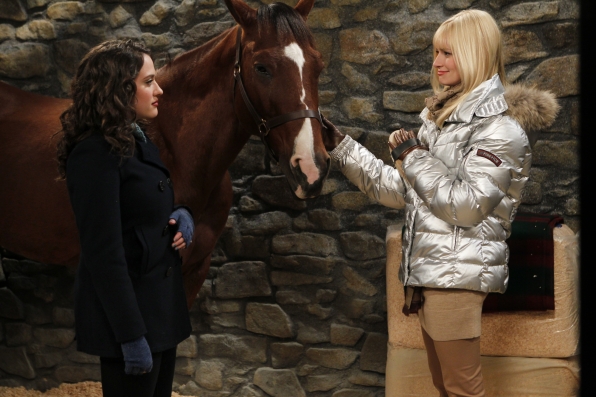 CBS’s Monday lineup featured two melancholy but wonderful offerings from 2 Broke Girls and How I Met Your Mother.

I’m not usually as taken with 2 Broke Girls as the rest of the world seems to be (it tries too hard), but this week’s episode was right on the money. From Caroline’s practiced “rich girl” show (“no, thank you for inviting me”) to Max’s emotional breakthrough saying goodbye to Chestnut (“you can’t say that touching something fuzzy and warm isn’t lovely, so thank you for everything, but especially for being fuzzy”), this was the first episode that made me laugh and actually care at the same time.

Over on How I Met Your Mother, a show that’s been making me laugh and do nothing but care about its characters for years now, there was the most heartbreaking/heartwarming episode since Marshall’s father died (perhaps ever). I thought the matter-of-fact way Robin’s first-ever voiceover just dropped the bomb about her having grown kids that are both Barney’s was a little suspicious, but I forgave the lack of revelatory tone as the episode progressed and her story about coming to terms with infertility drew me in. When those kids disappeared, taking with them her hypothetical happy ending with Barney (though I still believe that one’s down the line), the episode took its darkest turn yet. When Robin returned home to her in-the-dark roommate Ted determined to cheer her up no matter how much she pushed him away, I just about started to cry. I’ve always loved that How I Met Your Mother is just as dedicated to great friendship stories as it is to relationship ones. When Robin walked into that dark apartment I was sure it’d be Barney there, the only one with any hint of what was going on with her (though he only had half the story), and there’d be a sweet “he just gets me” romantic moment. But it was Ted, and that made me so much happier, because it can be easy to forget just how good a friend that guy is.

In related news, last episode’s “bro-parenting” also really worked for me. HIMYM is in the middle of a strong run.