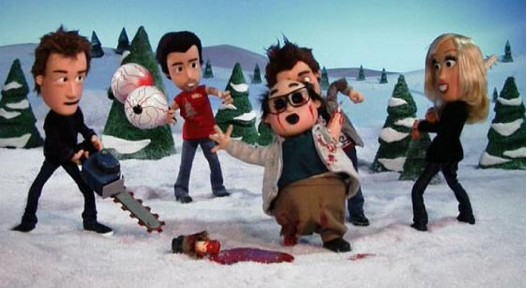 It’s Always Sunny in Philadelphia is probably the only thing less traditionally Christmas-y than Bad Santa. And yet the straight-to-DVD Always Sunny Christmas movie is about to become a new classic for my Christmas routine.

Frank Reynolds (Danny DeVito) was a horrible father to Deandra (Kaitlin Olson) and Dennis (Glenn Howerton) throughout a childhood of Christmases. He would find out what they wanted, then buy it for himself. When he tries to pull that trick on them again, they decide to, Dickens-like, teach him a lesson.
Meanwhile, Charlie (Charlie Day) and Mac (Rob McElhenney) examine their own childhood Christmas traditions, only to discover they weren’t quite as adorable as once anticipated. In true Sunny fashion, the results seem to go deeply past anything a normal human would think was possible in an endearing Christmas show.

The machinations of the plot are superfluous, although it is a shockingly well constructed special that plays out beautifully. The whole point of making the DVD, as far as I can tell, was to have an excuse to expose Danny DeVito’s backside to the unsuspecting viewer, but the side effect of this is that they have the budget to stage a beautiful claymation musical number (before Community did it, just sayin’).
And like all good Christmas specials, it also reaffirms our central cast’s relationship with each other in a way that is still in keeping with the “these are the four most awful people imaginable” vibe that Sunny has perfected over the years. The four of them throwing rocks at an incoming train, having found the one tradition that still works for them, is the closest this show gets to sentimental. And I wouldn’t have it any other way.

• The perfect antidote to the wholesomeness of It’s A Wonderful Life:

• You be the judge, who had the worse childhood Christmas tradition: A) MAC: going from house to house, stealing other children’s Christmas presents; B) CHARLIE: Hanging out at home, while many, many different Santas show up, give him presents, and… uh… hang out with his mother?