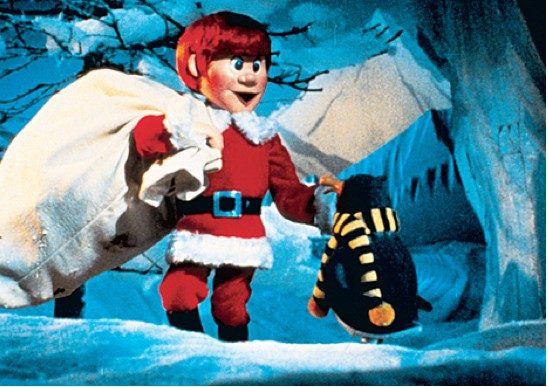 From the first frames of Santa Claus Is Coming to Town (fake newsreel footage of kids trying to get ready for the arrival of Santa Claus), I was sold. It’s filled with lush claymation landscapes, witty songs, a surprisingly complicated original plot, and themes that range from trying to be the best you can be to the power of being kind to people around you (no matter how weird, mean, or cruel they mean seem, or how comically weird their name may seem). It is also an enormous Nazi analogy, mixed with a Robin Hood story, but more on that later.

Santa Claus is Coming To Town is probably the least well known of the classics by Arthur Rankin and Jules Bass (who also did Rudolph and Frosty). But here are the bare bone facts: Fred Astaire sings, dances and narrates the piece as a postman who knows everything about Santa. Mickey Rooney voices Santa. The movie features a character named Burgermeister Meister Burger who lives in Summertown. Basically, it wants to tell the story of Kris Kringle’s transformation into the one and only Santa Claus.
Santa arrives at Burgermeister Meister Burger’s as an orphaned baby, but he’s sent away. Then, a crazy wind pulls him towards the lair of the Winter Warlock (who is 17 kinds of evil), so the animals save him and bring him to the Kringles (specifically, Dingle Kringle, which is the greatest name I’ve ever heard, until you hear his brothers’ names). The five brothers bring him to the Elf queen, who lets him live with them (and names him Kris).

The elves can’t get their awesome toys to the little boys and girls because of the awful mountain, but Kris promises to do just that when he grows up.
So grown up Kris (who’s a ginger, natch) tries to walk to the other side of the mountain to deliver toys and on the way encounters a penguin, thus confirming that penguins are indeed the Christmas bird. Kris and the penguin (Topper) arrive in Summertown, but Burgermeister Meister Burger has outlawed toys (in an Alan Menken-esque musical monologue). But Kris comes in, all red-trimmed and exuberant, and gives toys to all the girls and boys if only they’d stop pouting.
But when Burgermeister Meister Burger is ready to put the kibosh in the whole communist love-in, Kris and Topper have to take off, and Kris suddenly turns out to have all the nonconformist agility of Aladdin and ends up right in the grasp of the Winter Warlock. But Kris’s kindness, and desire to give the Winter Warlock a toy, causes Winter’s heart to melt. Winter helps Kris start making a list (to check twice) of all the children to help him deliver illicit presents.

Burgermeister Meister Burger is, understandably, unhappy and he and Kris start a nice little covert war that actually kind of reminded me of communications in the Warsaw ghetto. Actually, the whole series of scenes of herr Bergermeister with his German accent tearing apart people’s homes to try and find the illegal toys puts Santa in the odd position of playing the role of the Jews in this World War II homage. Or maybe he’s more of a toy-ferrying Harriet Tubman. Either way, he is captured by Herr Bergermeister, who lights their toys on fire and HOLY CRAP this is a Nazi analogy, I’m not just being overly flippant. This is totally intentional.

Anyway, Kris’s lady love (distressed about Kris’ arrest) starts singing an acid-trip-styled ballad about being changed by Kris and fascism (or something), which also causes her hairstyle to change from uptight bun to flowy hippie locks. At this point, it is abundantly obvious that this movie wants more than just to tell the story of Santa. It’s actually providing trenchant political analysis about greed and fascism being overcome by kindness and generosity. Also that hippies have better hair.

Badass Jessica then frees Kris and his friends using magic reindeer. Kris grows out his beard (like a dirty hippy) to hide from Burgermeister Meister Burger, and then changes his name to Santa Claus, before marrying Jessica “in front of the lord.” The Winter Warlock (who has been losing his magic throughout the movie) summons up one last ounce of magic and lights the first Christmas tree.
The movie ends with the beginning of the tradition of exchanging presents with the people you love on Christmas. A now-married Santa Claus takes on the task of giving out secret presents every year to the boys and girls. Thus Santa is recast from lovable philanthropist into the role of exiled revolutionary building his own castle outside of the society that banished him.

After the Burgermeisters fall from power, cool guys in jeans come and throw out their paintings and Santa is revered as the nice guy he truly is. But Santa gets old, and can no longer go out all the time delivering gifts, so he has to switch to just Christmas (because it is the holiest night of the year).

Even more than Rudolph, Santa Claus Is Coming To Town takes abundant advantage of the expanse of claymation. Every scene is full of countless awesome little details, and the characters are full of little visual quirks. And from the Nazi analogies, to the movie-ending monologue begging us to “learn Santa’s lesson” about peace on earth and goodwill towards man, no one can accuse this movie of being paint-by-numbers. It is the rare childhood classic that actually grows in estimation when watching it as an adult.

• Does Kris Kringle look like the brothers in 7 Brides for 7 Brothers to anyone else? I half expected him to throw some ladies over his shoulder and bring them back as his bride.

• “Watch out for the doll. She’s a hardened criminal I hear.” This movie is freaking adorable.

• “Why look here, changing from bad to good is as easy as taking your first step.” Who knew this movie was actually super helpful for New Year’s Resolutions as well as Christmas Cheer?

• 99% Watch: Besides Santa’s intense Socialist values, disregard for property laws, and distrust for authority (especially law enforcement), there’s actually less overt class warfare references here, just a general disdain for tyranny, except when it comes in the form of jolly men with beards.

• The point by point Santa explanations (“and that’s how he started going down chimneys”; “So that’s how he got the red suit!”) should be annoyingly on the nose, but they’re just so cute, I couldn’t get annoyed.