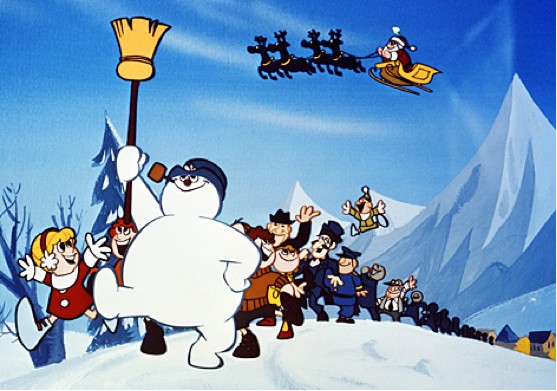 The second of our classic animation trifecta is Frosty.

Shorter and less revolutionary than its reindeer brethren, Frosty looks less like Coraline and more like a classic Rocky and Bullwinkle cartoon.

A bunch of kids get together after school on the day before Christmas to make a snowman. A magician’s magic (and very argumentative) hat falls on old Frosty’s head and he immediately comes to life.
The kids and magician accept this remarkably quickly.
Frosty is much more of a goofy children’s special, with very little to recommend itself outside of nostalgia and painfully catchy musical numbers.

With a dastardly, mustachioed magician, a wily bunny rabbit, and a precocious blond sidekick named Karen, dimwitted Frosty makes his way to North Pole salvation and encounters a series of trivial obstacles and adorable woodland creatures’ Christmas. Along the way, he seems to hit about 1,000 lame children’s movie clichés.
Then Frosty melts, and the children cry, and the jazzy/bluesy theme comes on, and Santa has to console poor abandoned Karen. Here, the movie gets as close as it comes to metaphor, talking about how “Christmas snow” is always around us, even when it seems like Spring or Summer.

Now, it may seem grumpy or un-Christmas-like to complain about a lack of substance in a half-hour animated special designed for children. But if I’ve learned anything throughout the other installments of this series, it’s that Christmas makes for particularly ripe creative ground, home for all sorts of stories about love and acceptance. So, as somewhat nauseous as it makes me to admit it, I’ll say it – Frosty kind of sucks. It’s not a particularly substantial story to begin with, but the animated special could be more fun to make up for its lack of real stuff. Instead, it feels surprisingly paint by numbers.

• “Those silly snowmen, once they come to life, they don’t know nothin’.”

• 99% Watch: The children and Frosty’s lack of money keeps them from getting him to the North Pole, but some clever Robin Hood’ing by Frosty (jumping a refrigerator car on a train, naturally) gets him there anyway.

• Maybe Karen is so cold because she’s not wearing pants.