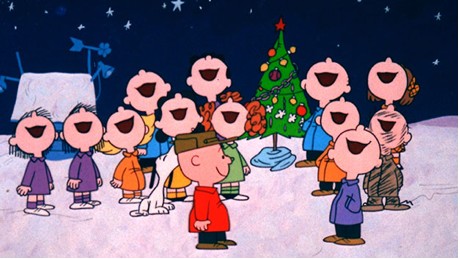 To say that A Charlie Brown Christmas is melancholy is not exactly a news flash, but it’s nonetheless affecting.

From the first chords of Vince Guaraldi, you’re 100% into the existential despair that Charlie Brown finds himself in. It’s sort of strangely appropriate that I find myself watching a movie all about finding the meaning of Christmas when I’m right in the middle of this little experiment and experiencing, I’ll admit it, a bit of Christmas movie fatigue.

“I feel depressed, I know I should be happy, but I’m not,” says Charlie with aching sincerity. He’s caught in the middle of a glorious winter landscape, and surrounded by people full of Christmas Cheer, but he’s feeling empty and lonely and lost. Anyone over the age of 10 has had this moment, staring at all the Christmas lights around the house and wondering why it doesn’t hold the same joy it did when they were young. He sees the commercialism and hollow ritual that can seem to overwhelm any real gestures of “peace or goodwill towards men.” And the more disconnected he feels from the people around him (even when he’s helping them by directing the Christmas play), the emptier the whole ritual of Christmas seems.

One of the joys of Peanuts has always been the contrast between Charlie’s functional depression and Snoopy’s imaginative tomfoolery, a kind of metaphorical representative of the dichotomy between how terrifying and lonely being a kid can be with how freaking exciting it can be. Here, that dichotomy is represented beautifully by the contrast between the omnipresent “Christmas time is here” score and the hyperactive music that represents the play.

And just like childhood, Christmas is a time of great contrasts. Of loving our rituals while feeling trapped by them, Of seeing relatives and friends whom we have missed while simultaneously finding them kind of annoying. Of trying to find the perfect representation of what Christmas means to us while also trying to make that representation run deeper than just the surface.

And so Charlie finds himself becoming obsessed with a pathetic little survivor of a Christmas Tree, as alone and unable to fit in as Charlie himself. But in the spirit of the season, and with the magic of a great Christmas special, the other people come together, creating a makeshift family for Charlie and the spirit of togetherness and joy that he was searching for.

Not to get all film-major-y, but the use of sound in this movie really blew me away. The contrasts created by the ample use of silence, and the slightly echo-y quality to the voices, makes for a movie that feels like an avant garde film that just happens to feature characters who regularly show up in the funny pages of your local newspaper. And the great crescendo of this cacophony of sound and silence is the movie ending sing along with all the characters “Hark the Herald Angels Sing,” a song that perfectly encapsulates the spiritually wandering Christmas offering.

“I know nobody likes me, why do we have to have a holiday season to emphasize it?”