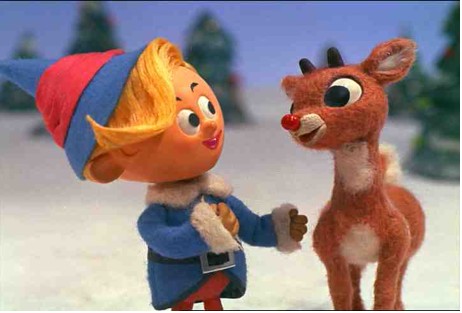 Ah, claymation. The most sacred purview of Christmas movies. The next few installments of the 24 Days of Christmas will be going through the Christmas classics of the claymated and classically animated variety: Rudolph, Frosty, and Santa Claus is Comin’ to Town.
First, to Rudolph.

Narrated by Sam, the talking Snow Man, Rudolph starts with the devastating news that bad weather is threatening the celebration of Christmas. Luckily, as the narrator Snow Man tells us, Santa has Rudolph. We don’t know how, yet, but we know that plucky little reindeer is going to save the day.

The first thing I noticed was how gorgeously old school this animation is. Since it’s been a while since I’ve sat down with originals, my most recent memories of this particular school of animation were from Community and It’s Always Sunny. But on this old school track, you can see every tuff of awkwardly constructed reindeer hair. You can see the precarious puppetry behind surprisingly Trotsky-looking Santa. And you can really see how adorable Rudolph is.
The story of how Rudolph became the savior of Christmas is, as you probably remember, the tale of “nonconformist,” red-nosed Rudolph becoming accepted for exactly what he is by the reindeer and the surprisingly mean and judgmental version of Santa. There’s also an awesome abominable snowman who traipses around Christmasland, scaring reindeer, elves and Santa alike.
Then, there’s also the goofy Herbie, an “unhappy in his work” elf who is messing things up at the Elf factory because of his desire to be a dentist.

In this version of the North Pole, apparently Santa is a conformity minded task master who grooms reindeer to do his bidding while oppressing his elven workers (99% WATCH). After the elves put together a beautiful musical number for Santa, he dismisses them with a “well it needed work” and then jets off to go judge (overly harshly) the reindeer.
In fact, increasingly as I watched Rudolph The Red Nosed Reindeer, I was reminded of the fact that this movie came out in 1964, and it feels intensely like a product of that time. In fact, the reindeer flirting scenes seem taken straight out of a cheesy 50s beach party movie. Comet the reindeer seems like the quintessential 60s era overbearing sports coach. And if Donnor, in the role of Rudolph’s father, had started talking about fighting the Japs in WWII, I would not have been surprised.

And there’s an intense counter culture vibe running through this. I’m not kidding, by the way. Rudolph could be one of the most subversive movies to ever feature an extended musical number with singing snow bunnies. While being a dentist and having a red nose may not seem like counter culture statements, the whole theme of “independence” and being a misfit and going against society’s rules, especially in view of the movie’s early 1960’s release, is pretty profound. It’s even kind of feminist, with douchebag Daddy Donnor trying to keep Mama Donnor in the house, to which she basically says “screw you” and heads out with Rudolph’s future gal pal, Clarice, to search for her missing toy*.

And that’s all before they get to the Island of Misfit Toys, where hundreds of toys sit alone and abandoned due to manufacturing defects. A thriving subculture develops (complete with carefully harmonized musical numbers!) among Santa’s rejects, who nonetheless spend their time yearning for the Christmas day that will never be theirs. It’s a case study in thwarted desire and the beauty of solidarity among society’s cast offs. Substitute misfit toy for any oppressed subculture, and the movie sounds even more radical. After all, this is a world in which even the abominable snowman, when shown some understanding, wants to come in and help decorate the Christmas tree.
Eventually, the elves, reindeer and Santa realize they were being jerks and welcome Herbie, Rudolph, the abominable snowman, and Yukon Cornelius into their midst, just in time to take advantage of the things they once hated about them.

And so Reindeer and his glowy nose guide Santa and his sleigh straight to the Island of Misfit toys. They rescue the misfit presents, and then bring gifts to all the good little boys and girls the world over.
And thus, in the minds of millions of little boys and girls the world over, was planted the idea that the weirdo you made fun of in gym class is one day going to totally beat you at your own job. And if only they’d taken that lesson to heart, instead of getting distracted by the cute fawns across the way, then the 80s would have never seen the Revenge of the Nerds franchise.

• “Why am I such a misfit? I am not just a nitwit.” I DARE you not to feel bad for the sad little Rudolph.

• The name Clarice has been ruined by The Silence of the Lambs.

• “From now on, gang, we won’t let Rudolph join in ANY reindeer games, right?”

* Okay so maybe I overstated the feminism, since very quickly thereafter: “of course, they were very sad about the loss of their friend, but they realized the best thing to do is get the women home safely.”