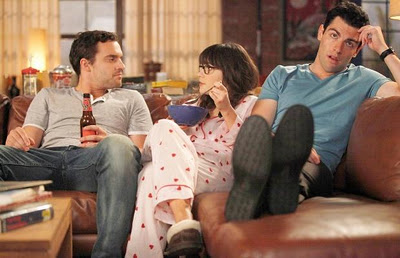 Up next in our “Talking to Fox” series is New Girl‘s Jake Johnson who plays Nick on the fall season’s best new comedy. The “sweet one” in the series’ central trio of bros, Nick is the glue that holds their household and their new roommate Jess (Zooey Deschanel) together.

Here’s what Jake had to say in his recent conference call:

#HotCo-StarIssues
“We work with the same crew all the time and you become like a family. So there’s like 40 members of your family watching you in really tight underwear dancing to reggae music. And then, you know, Zooey Deschanel walking in which doesn’t feel great to be in tiny underwear in front of Zooey Deschanel and then Lake Bell coming in. These are two attractive women.”

Just Shut-Up And Dance
“It wasn’t the easiest day of my work life. I’ll tell you that. But I think the episode turned out. You know, I said to Jake Kasdan who was directing that episode, I tried to weasel out of it and said, ‘Maybe Nick would be wearing a shirt,’ and he just very easily he said, ‘No he would not. He is going to be shirtless in the episode and in tiny underwear.’ So that’s as far as that talk went.”

Bros on the Gaydar
“my personal opinion is, is that Schmidt is right on the line” when asked why Schmidt is so preoccupied with getting to see Nick’s penis in the episode “Naked”.

Because It’s Funnier
Instead of doing the timely thing and having Nick not have health insurance for the same reasons as millions of Americans, in an upcoming episode we learn that “it’s because of his childhood and his parents’ tough love approach with him”.

On Chemistry and The Inevitable Nick-Jess Hookup
“I think when we did the pilot it wasn’t necessarily there while we were reading the pages of it. And then I think when Zooey and I were doing our things together there was a natural chemistry between the two of us. And I think we both also really like working with another and I think the writers saw that and liked it and had been going towards it. But I think the way they’ll play it or the way it’s been played so far is the way, kind of, romances like that work in real life and that’s–the stuff takes time.”

Famous Friends Are Awesome
“Jonah and I became friends when I did a thing called Clark and Michael with Michael Cera and Clark Duke and Max Winkler. And Jonah went around watching that and then since then he got me auditions for his movies and we’ve become good friends while working together. And I can honestly say once a week I send him a text saying, ‘Hey, do you want to come on the show and do anything?’ So if Jonah Hill it ever wants to be on New Girl I will be in Liz Meriwether’s office begging for them but I’m sure it’ll be easy. I know he’s exceptionally busy with his movies right now. But I would love to see Jonah Hill on the show. He’s truly one of the funniest dudes I’ve ever met.”

Obvious Answer of the Day
“I think the big difference between [my character] Nick and I is, as Jake, I have an acting career and Nick doesn’t have anything yet.”

Baseball- Always the Best Metaphor
When asked how hard it was to be rejected a lot when he first started out in Hollywood, Jake explained in sports terms: “I view it like baseball in that if you get 3 hits out of 10, you’re an All-Star. If you get 4 out of 10, you’re a Hall of Famer. So that means you failed 6 times out of 10. I kind of view it with acting it just takes one or two really good parts for people to see what you can do.”

Bromance, On and Off Screen
“We went through the audition process together, Max and I were cast together and we fought to get Lamorne. And so there’s already a loyalty that we all have as guys to each other. So I feel like what’s nice is the characters have that also.” About his on-screen roommates Schmidt (Max Greenfield) and Winston (Lamorne Morris).

A Writer’s Medium
Someone had to ask the annoying question of “How much do you get to improvise and go off the script?”, which Jake answered simply with “I would say probably 90% to 95% is on the page”. It’s the writers’ show, these guys just play it.

Check out parts 1 & 2 of “Talking to Fox”- Allen Gregory and Raising Hope. And stay tuned for part 4- Bones.