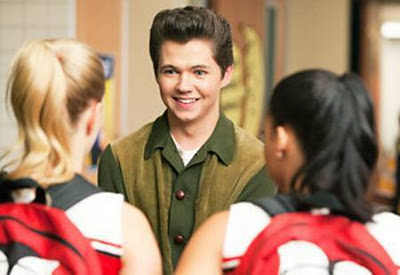 If you read this site regularly you know how long I’ve been looking forward to this episode of Glee– since the first time I saw The Glee Project. Damian was my favourite from the get-go and the twist “everyone wins” ending landed him a 7 episode arc starting with 304- this week. But the episode was far from the greatness I expected, as was Damian’s uninspired character Rory (whom Brittany thinks is a leprechaun- original!) Blah Blah Blah. Glee can do better. And Damian deserves better.

Here are the questions I have after this confounding 43 minutes of my life:

– I get it, you wanted him to sing the Kermit song, but does he really have to wear exclusively green? Also, what a boring song choice. At least do something interesting with it once he’s stuck with it! What? No, you don’t do interesting? Okay.

– Why didn’t the director think to just ask him to slow down so we could maybe catch a word or two beneath the thick (but lovely) accent?

– There is the occasional line thrown in there referencing her great “this is all I have” plea to Rachel last season but does Quinn really not realize that she’s completely abandoned any sense of a moral code? Must we always make her a villain?

– I get that he’s jealous of the new effortless leader, but does Finn really have to be that mean to Blaine?

– Why would Kurt be the second last person to join his boyfriend’s senseless and stuck-in-so-Darren-Criss-can-sing-Katy-Perry “Last Friday Night” dance party?

– Why do the writers think they can get away with inserting useless numbers so long as they have a character say something along the lines of “I think we should do that at sectionals”, when everyone knows they’ll be making up their sectionals numbers seconds before the show?

– Seriously, why DOES Rachel get all the solos?

– Why are the pictures in Rory’s locker not of him with real-life bffs Hannah and Cameron as a shoutout to Glee Project fans?

– Did Santana really just use the word “gay” as an insult?! Really?! This show is so full of it- either be enlightened and above it all or be realistic about your characters’ smalltown midwestern likelihood to have crap like that in their vocabulary, but you CANNOT make a big stink about acceptance then have even your gay characters not get that language like that is a major part of the problem.

– If Santana loves Brittany, why is she manipulating and lying to her for her own personal gain?

– Oh come on, glee club did not save Kurt’s life. Kurt saved Kurt’s life, with a little help from Blaine.

– Why is Mike O’Malley the best ever? And Burt Hummel the best character on the show?!

– How did it take this long for Puck to get a story worth playing? Mark Saling’s so great, a standout from season one that the writers seemed to forget they had. Father Puck is great.

– They’re not gonna do something stupid like write a Puck/Shelby romance are they? That would really ruin the sweet and nuanced story they’ve got going with him.

– When did Brittany become the only character with a spine? Way to stand up to Finn’s random jerkiness without a single moment of hesitation!

– Why is Vanessa Lengies still playing a teenager? Especially such a clueless one.

– If the arts are so under-funded at this school, where do they get the money for new costumes multiple times a week for numbers they never perform publicly?

– Why does Finn think him and Brittany are friends? I don’t think they’ve ever spoken before.

– Why are people being mean to Damian?!?!?!?! I know I’ve said this already, but, seriously, *protective instincts kicking in*

– Why does Kurt still not know how much his dad supports him? But kudos for being the first to think of Burt’s health.

– Why is Sue right so often? I love it, but she never gets credit for it. I’m all for arts funding but she is completely right about special education, not to mention her little speech in which the writers showed their first self-awareness ever “I think [special education] might be a better use of school funds than flying the glee club to New York without a set list only to lose at nationals with a song they made up the night before”. I know she’s the villain so acknowledging this is “wrong” on the scary Glee morality scale but SHE’S RIGHT. AGAIN.

– Why do the hockey players have mullets? Really, why? And why does McKinley all of a sudden have a hockey team? (or were those weird-looking football players we’ve never seen before?)

– Why doesn’t Mike Chang always get lines? He said like 2 words this week and they were great. I miss him. Always.

– Why oh WHY is Rory supposed to love America so much? That’s just so Written By Americans. Gross.

– Is Kurt annoyed by Rory because of the falsetto? Really? Blaine’s impressed, can’t Kurt be welcoming?

– Why, every time I specifically wish they won’t do something stupid (see earlier when I worried they’d try Puck with Shelby) do THEY DO IT? WHY?

– Who writes this crap?

But mostly what I want to know is why why why, when handed a leading man as charming as Damian, the Glee writers didn’t set him up for a potential long run? It’s a waste and if the non-Glee Project casting department is just going to spit out another Finn (dumb, uninteresting, bad singer, terrible dancer, not cute enough to make up for it), I’ll be so angry that they had the charming and handsome sweetie pie with the smooth voice and fun accent and gave him bad, kitschy dialogue and a desperate character in a silly silly story instead of the real potential to be the next go-to leading man.