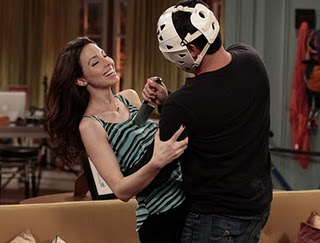 The Halloween Episode used to be a rarity. In 10 years of FRIENDS we got 10 Thanksgivings and what, maybe 2 Halloweens? Ugly Betty dressed up as a caterpillar in season one, and there was that one year when the Scooby gang became their costumes*. But lately it seems as though every show is onto the trend- it’s not just The Office anymore, it’s every show on TV. This is the week of The Halloween Episode.

But the ever-improving folks over at Whitney decided to give us something different. The sitcom is quickly becoming one of my favourites of the season and their Halloween-light Halloween episode was easily their best yet. I laughed out loud almost the entire way through.

It all started when we learned that Alex (Whitney’s boyfriend and easily the series’ best character) never washes his jeans, because it would change their shape. Grossed out and mildly afraid of hepatitis, Whitney starts to argue with him then stops short when he pulls out “the tone”, which he doesn’t realize he does. Determined to prove “the tone” exists, and mostly because she’s Whitney so she’s crazy, Whit hatches a plan to bug the apartment and plant her friends nearby to watch for the evidence on the monitor. Her task: to annoy Alex enough that he slips into his condescending “tone”.

The result is some of the best physical comedy the show’s done, particularly from the excellent Chris D’Elia as Alex attempts to deal with the foreign newly-washed-jean feeling Whitney forces on him. A now-Whitney-standard “Alex figures out Whitney’s scheme and turns it around on her”, and one weird and damn funny lap dance later, the truth about the camera comes out, but not before some quality “Alex and Whit as reality TV” comedy from the supporting cast.

Now, with the exception of a choice “check it out, full size candy bars- I’m gonna be a hero!” line about trick-or-treaters, this couldn’t really be considered a Halloween episode. But the genius of the tag put all the other Halloween Episodes to shame this season. The staging of Whitney’s murder by an unknown masked man (aka Alex’s brother, guest star Ken Marino) was the perfect cap to the guilty pleasure reality TV arc that made the episode particularly great. It may not have been the most believable freakout, but when Alex walked through that door, revealing himself to not be the masked man, the screams were every bit worth the silliness.