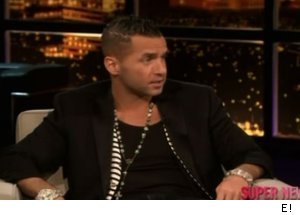 The Situation is a hit on Chelsea Lately

I’ve never seen an episode of Jersey Shore but I’ve got to say from public appearances alone (and the occasional glimpse on Dancing with the Stars) I kind of like The Situation. He’s making the most of his 15 minutes, that’s for sure (well, at this point it’s got to be at least like an hour and a half) and he’s got this weird guilt-inducing charm thing that’s quite frankly dangerous. The story about his thought process after purposefully running into a wall is idiotic but told with such self-aware humour that you’ve just gotta laugh with him, instead of at him- it’s a weird phenomenon. I know, I know “watch the show, you’ll change your mind” but I sort of don’t want to. I like liking the people I’m not supposed to like, even if I mostly only like his carefully-crafted talk show self. Now would I ever in a million years want to meet the guy? That’s a different story.

Click Here for the video of The Situation on Chelsea Lately.