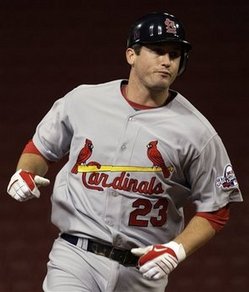 The St. Louis Cardinals had to win this game to force a seventh in the race for the 2011 World Series Title. They were down 5-7 going into the ninth.

Lifelong Cardinals fan and homebred Missouri boy David Freese hit a bottom of the 9th, 2-out, 2-RBI triple that tied the game, saving the series for his team and forcing the Texas Rangers into extra innings.

Then a 2-RBI homer from Josh Hamilton put the Rangers back on top. But the Cardinals loaded the bases and drove in another run in the bottom of the 10th. After Scott Feldman intentionally walked Albert Pujols, a single from Lance Berkman scored one more and sent the game to an 11th inning.

The Rangers did nothing in the top of the 11th, so after an incredible game of ups and downs and great play from both teams it came down to the Cardinals with a score of 9-9 in the bottom of the 11th. A centrefield solo homer from Freese won the game just moments ago, making him the unquestioned hero of the game. A triumphant display at home plate capped the enthralling game at 10-9 for the Cardinals.

On to Game 7 tomorrow at 7pm. As Jamie Campbell put it, “if you’ve got plans, break’em, ’cause this could be fun”.