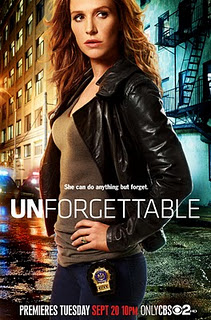 The inherent empathy of someone who remembers every detail she ever learns about someone makes for an intriguing concept. But Unforgettable never makes good on that promise. The Poppy Montgomery-led CBS drama is as typical as it is procedural.

Perhaps based on the high enjoyment factor of Without a Trace, CBS has put a lot of stock in the Australian actress, but I’m not sure her leading lady chops have the weight the network was expecting. She struggles with covering up her accent for the NY-based role and brings limited sparkle to a part that doesn’t allow her much help in the way of witty writing or palpable relationships. I enjoyed the addition of her mother- a good Alzheimer’s-stricken parent story always bring a character some much-needed empathy- but even that plot is long past fresh.

Ultimately there is nothing new or particularly intriguing about CBS’s new police drama (like they needed another one of those!). In fact, if I could pick just one word to describe it, I would happily embrace the little bit of entertainment I can get out of this boring show by choosing the word “forgettable”.