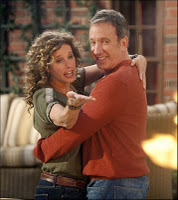 ABC was very “man”ly this week with the premiere of the atrociously sexist (or, rather, atrociously bad and offensive to all well-rounded and sensible people) Man Up!, a pretty-great-actually male-centric Grey’s Anatomy that contradicted Man Up‘s theories of Neanderthal superiority and the premiere of Tim Allen’s new show, complete with trademark grunts and “I’m a man!” humour. And while Last Man Standing isn’t nearly as offensive as its Tuesday night programming buddy, it’s still pretty misguided and almost as badly executed.

Allen is a fairly likable guy. I don’t mean that he could stand up next to a John Krasinski or a Neil Patrick Harris- or even a Jim Parsons or a Jon Cryer for that matter- and win a comedy leading man charm contest, but his is the voice of Buzz Lightyear and Home Improvement is remembered fondly, so he starts off the series in the right direction. Where the show goes wrong is to take the tongue-in-cheek machismo that marks both those famous roles and attempt to turn it into a premise all on its own. There’s very little going on in Last Man Standing aside from Tim Allen being a behind-the-times, un-PC but generally well-intentioned guy’s guy in a world full of women and the occasional woo-woo preschool teacher. He may inspire a certain degree of fondness, but Allen just isn’t enough to carry an entire show on a premise that unhelpful. It’s just old and tired and not particularly clever. Unfortunately, I think that was somewhat predictable for a show centered on a man who is now old and tired and was never known as all that clever to begin with.