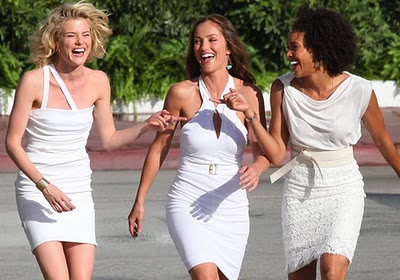 The new Charlie’s Angels has more problems than anything that should ever have made it to series.

First there’s the simple issue of the outdated premise- one Hollywood seems to think is “classic” and everyone else knows to be played out. There’s the tone- the franchise thrives as a comedy (see the tongue-in-cheek films and their surprising success), as a drama it feels lightweight, in a bad way.

Then there’s the major, central issue of characters and casting. There is a line dividing the women who can pull of being kick ass in perfect lipstick from the ones who make me laugh when they try to convince me they’re highly coiffed marines. That line is somewhere after Syndney Bristow and before, well, this. All three of the stunningly beautiful women in the new Charlie’s Angels have a delicate girlishness to them that makes the premise impossible to sell. From Minka Kelly’s breathy lilt to Rachael Taylor’s soft curls to Annie Ilonzeh’s perfect skin- I don’t believe for a second that any of these girls could withstand torture (as Kelly does in the pilot) not to mention Angelina Jolie their way to superspy status. They’re gorgeous, yes, and in a comedy that might be okay, but the tone of this show is telling me I’m supposed to take them seriously and they spend entirely too much time in the makeup trailer for that to be a possibility. (I would like to point out that Sydney only wore makeup on missions, she was otherwise just a fit and smart young woman who had bigger things to worry about- same with Fringe‘s beautiful Olivia Dunham, Dexter hottie Deb Morgan and most other successful TV badasses).

Along the lines of the show’s general aesthetic ridiculousness (without the self-awareness to pull that off), the reversal on Bosley was a little dumb. And how Hollywood is that?! Making the usually schlubby character super hot is weirdly commercial and just random, though it does even out the eye candy issue and maybe eliminates some of the more offensive objectification problems, so who am I to complain?

Oh, but here’s the other problem, and there’s really no getting around this one: the writing is horrendous! In the hands of the painfully unnatural Rachael Taylor, specifically, the dialogue is so trite that I was having serious trouble not laughing out loud. From the incredibly forced mourning of fellow angel Gloria- “I never knew that my heart could hurt this much… we were her family, she was our sister” to the  idiotic feminization of the genre with stupid lines like “hand me the Prada” when asking for gear and the gem that is “Abby put the cat in cat burglar” to girlish bragging- “last time I cracked one of these it was under 2 minutes but that was after two cosmos and I was hanging upside down”, the lines they make these girls spout are just offensive to the ears. Then there’s the “oh so topical” twist of Abby’s father being an incarcerated wall street titan, participating in a gimmick that’s getting old REALLY fast.

They could have cast the world’s most perfect angels, fixed the tone, bumped up production standards and promoted the hell out of this thing but without better writing, it’s going caput fast. The whole thing is beautiful but passionless- a great crime in a revenge story.