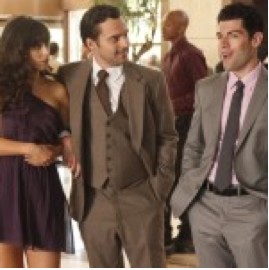 I didn’t want to. It felt like a meager replacement for My Boys, Zooey Deschanel was basically playing Zooey Deschanel, and in the first episode the leading guys consisted of two thinly sketched caricatures and an overly nice everyman. Even the marketing ticked me off, constantly referencing Deschanel’s “adorkability” (a term that simultaneously made me seethe with rage and kind of jealous that no one’s ever described me that way).

Yet even in my grumpy pilot episode review, I think I secretly knew. I knew those damn boys would grow on me, and that I’d start laughing at Jess’s wacky (but now much more endearingly so) antics, and that I’d start to really buy their affection for each other.

In this week’s (the series’ third) episode all the things that had been working since the pilot (and a few that had been iffy) came together. The plot hinged around the foursome going to a wedding. All four characters had an interesting story to follow. Schmidt wanted to sleep with a hot chick he’d known from college, while simultaneously avoiding the allure of his normal wedding hookup (played by Natasha Lyonne, I missed her). Winston wants to prove he’s not a total failure after moving back from his professional football career. Nick was finally seeing Caroline (the dreaded ex). He brought along Jess, but made it imperative that she keep the crazy in check. Jess predictably fails, but watching the slow burn of her insanity made for an amusingly endearing look at her wacky behavior.

The episode follows almost the exact same structure as previous episodes. But instead of the boys saving Jess, Jess gets a chance to show that she’s a functional human being too, helping Nick get truly over Caroline, getting Schmidt realize he wants something more resembling monogamy, and having a nice, sincere conversation with Winston.

Then the foursome did something wacky to prove how adorable they all are. So far, every episode has seen at least one wacky type closer. All the boys singing to her in the restaurant in the pilot. The silly hats in the second. And here, the foursome performs the chicken dance to a slow song. But what’s changed is how much glee the actors are bringing to the moment, and how much more invested I feel in their goofy ass resolution.

New Girl will probably never be mindblowing entertainment. But I was recently reading a fascinating review of 2 Broke Girls in which the author mentioned comedy writer Ken Levine talking about what he looked for in first seasons of comedy series. To paraphrase, he didn’t worry if the jokes weren’t there yet, or if the plot was meandering, or if the characters weren’t original. He needed a strong, central relationship. New Girl has finally made me buy into that. (It doesn’t hurt that the jokes are really starting to make me laugh too).