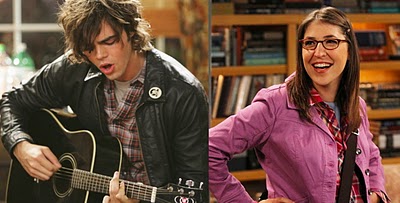 This week featured the brilliant premieres of Modern Family and Big Bang Theory. Amidst full hours of comedy on both fronts (some of their best episodes to date), two supporting characters showed the incredible bench depth of both series.

The first episode of Modern Family* sported a fantastic subplot about Haley’s boyfriend Dylan (Reid Ewing).  Dylan’s always been one of my favourite characters on the series but with what seems to be his last episode he was given more jokes than ever before, all of which Ewing delivered with phenomenal dead pan timing as the bighearted doofus cool kid. If Dylan really is going off to become a ranch hand I’ll miss him probably even more than Phil will.

Over on The Big Bang Theory, all sorts of fun hijinks ensued during the fallout from Raj and Penny’s hookup and the lighter episode that followed. But the highlight was undoubtedly Mayim Bialik’s sensational Amy Farrah Fowler. Now that the core group has expanded to include not only Amy but Howard’s adorably fun fiancee Bernadette (“of course you [stand a chance with Penny], you’re a cutie pie, any girl would be lucky to have you” she shouted in a rage at Raj), The Big Bang Theory is better than ever. Her desperate excitement over Penny’s bff-status, her straight-talking friendship with Sheldon, her sense of humour (“has Penny acquired a bar stool dipped in cholera?”), her mad harp skills (“Girl from Ipanema” and TV theme songs!)- I just love everything about Amy Farrah Fowler.

Quote of the Episode:
Amy: “Kiss me where I’ve never been kissed before”
Sheldon: “Like Salt Lake?”

*in slightly unrelated news, does anybody else thinks it’s incredibly weird that we just skipped 2 years of Lily’s life without skipping ahead in time? How did that kid become 4 years old over the summer? Also, Nolan Gould grew like 4 feet over the break.