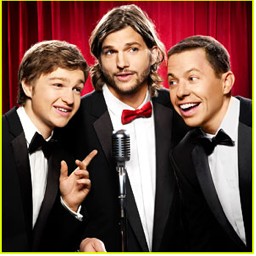 THE CONTEXT: While not exactly a fan of Two and Half Men, I have watched a good portion of the early seasons, and am able to laugh pretty unselfconsciously at the series’ particular take on sitcom conventions. And I’m intrigued to see how they deal with all the real life scandal.

• Oh so no bones about this? Right into the dead Charlie moment? Good for the show, I guess.

• HOLY CRAP. When did the half man become a full man? Is that creepy? Probably. (EDITOR’S NOTE: Looked on IMDB. He’s 18. So creepy, still, but not illegal. Definitely creepy though.)

• One thing people always say about this show is that there is an overabundance of sex jokes. First five minutes… definitely confirms that.

• So Charlie was murdered? That’s fun.

• Why is John Stamos here? But man he’s good looking.

• Jenna Elfman? Did they decide to replace Charlie Sheen with everyone famous? OH SHIT GREG TOO. AND THEY’RE FIGHTING AND AWFUL. I love it. Cheap as shit ploy, but since I didn’t know it in advanced, I’ll forgive them.

• “just like old times, huh? I’m talking and you’re in a bottle ignoring me.” This is the closest Two and Half Men gets to sensitivity. Okay actually there’s a semi sweet monologue at this point by Cryer, but it’s offset by an extended rant about Pamela Anderson swallowing Charlie’s ashes.

• Mostly, I don’t get annoyed by audience reactions on shows like this, but listening to the crowd go nutsoid when Kutcher shows up is annoying.

• I want to cut Kutcher’s hair off.

• Kutcher:“trust me, money does not buy happiness.” Alan: “I wouldn’t know, I’ve never had either.”

• And now Kutcher is shirtless. And pantsless. And naked? And hugging Jon Cryer? Charlie Sheen never did that.

• Appletinis must be an inherently cinematic drink, because shows love to use it to prove that characters are girly. In this case, it just makes them look like they’re drinking absinthe. Which is not girly. Obviously.

• Even though I’ve already said I love him, I don’t think enough can be said about how great Jon Cryer is in life. Not only was he classy through the whole debacle with Charlie Sheen and trolls, but he’s so likeably fun he makes me forget that I think this show is stupid.

• Like, seriously. I want to shave that beard off of Kutcher’s face. I get that he’s depressed, but by god man, think of the children.

• And he’s naked again. But still has the beard.

OVERALL IMPRESSION: IF you liked the show before, everything you liked is still there (Except for Charlie Sheen, I suppose). There’s cheap sex jokes, a distinct lack of sentimentality, a vague air of homophobia, and dialogue that dances on the line of witty, but rarely crosses over. Kutcher’s Wally brings an interesting contrast to Allen’s wordy nebishy awkwardness, with Wally instead playing an oblivious, overgrown, obscenely rich child. I probably won’t be any more likely to tune into the occasional Two and a Half Men now, but I won’t be any less likely.