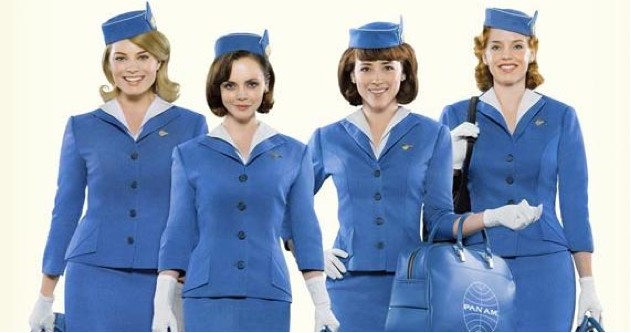 The two tv shows debuting this fall season that deal with the sixties are implied to be something of Mad Men clones. But the truth is, as far as period pieces go, the fifties and sixties are pretty much the best of places to hang out. Change was in the air, and the constant motifs of oppression (be it in the form of racism, sexism, or communism) contrasted with the growing bubbling of liberation provides a perfect back drop for personal stories of self realization and pressing against societal expectations. It’s part (though not all) of what makes Mad Men, and specifically Don Draper’s identity crisis in Mad Men, so damn compelling. It’s also a large portion of what works so well about the Pan Am pilot.

When I started watching, I found myself dancing around the question of how to make a work that deals with sexism without being sexist. It’s too early to definitively call Pan Am‘s viewpoint anything, but I think it effectively dodges the bullet of making its carefully attired protagonists merely pretty plot points, and that’s saying something. Despite a backdrop that requires the perfectly proportioned women to squeeze into girdles and weigh in at the beginning of each flight, Pan Am as a show is happy to quietly explore these women’s dreams, motivations, loves, and opportunities.

The first thing you notice about the show is how gorgeous it looks. It’s shot like a movie (like a less CGI-ed Sky Captain and the World of Tomorrow, actually) and paced like one too, while dropping in more than enough mythology, intrigue and character shades to help establish what every episode of the show is going to feel like. By the end of the pilot episode, one finds oneself not only with a clear idea of the promise Pan Am holds, but also a clear idea of how far this series can go.

Often the show can feel like a trifle. From the jazzy crooner music, to the popping light colors and beautifully realized aesthetic, to the storylines involving married lovers and cancelled weddings, the show has wrapped itself in a veneer of the trivial. But there are hints at something deeper and more profound. I have high hopes that this show (and the cast of talented actresses who play the protagonists) can really examine the role of women in an era when they were often relegated to buxom secretaries. But even if it doesn’t prove to be the feminist trove I want it to be, there’s a lot going on here. A subplot that involves spying goes a long way toward deepening the scope of the show and providing real stakes to the characters’ plots. And it feeds into the sense of “a world on the verge of change,” which is wonderfully encapsulated by a flashback that shows the crew abandoning their usual routes of overpriviledged white folks visiting overseas to rescue some hostages from Cuba. This was a time of turmoil, both in the personal and political spears, and the Pan Am pilot* proves that it is more than up to the challenge of dealing with the two.

The cast is pretty fabulous, even as they’re not given a lot to do here. I am especially looking forward to seeing Christina Ricci at her beatnik best as Maggie, and exploring the world of Kate (played by Kelli Garner) as she begins to expand her opportunities outside of serving drinks. These women are smart, confident women, the type who today would probably get their MBAs and Law Degrees. In the Pan Am universe, the options for a multi-lingual college educated woman was basically to work the friendly skies until they finally settle down and get married (or turn 32, whichever comes first).

This theme, of women trying to figure out what it means to have been given the same educational opportunities as men without the life opportunities men receive, is probably the most compelling ongoing theme of the season, and it is, ironically, explained by the flirty-to-the-point-of-harassment first mate:“You think the first man to crawl out of the primordial ooze knew he was different? No, he just had an urge that there was more tot his life than primordial ooze… see that table over there? THAT is natural selection. They don’t know that they’re a new breed of woman, they just had an impulse to take flight.”

Pan Am plays with history, and our knowledge that the “flight” in question is a given, and as such creates a dramatically tense and gorgeously shot pilot.

*Editor’s Note- does no one else feel the need to revel in the wonderful pun of the phrase “Pan Am pilot”?!