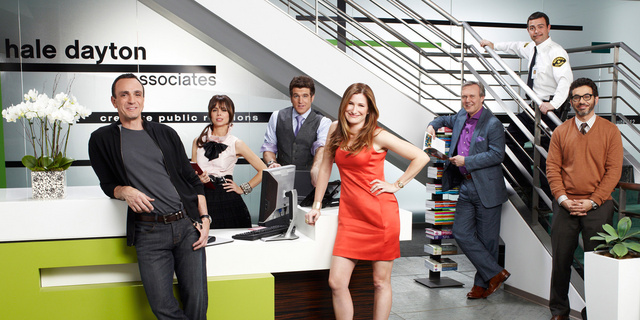 One of the worst promoted shows of the new fall TV season is Free Agents, a silly-looking, offensively marketed story about a workplace hookup. But even with a poster that “cleverly” hints a storeroom blowjobs, Free Agents snagged me with the promise of a weekly dose of the endlessly awesome Hank Azaria. The charmingly neurotic and inescapably intelligent actor has always been a favourite and any show with him at the centre deserves at least a 3 episode sampling. Kathryn Hahn, a perennially underused but excellently charming actress, was also a promising get in the female lead, as was Natasha Leggero as a difficult executive assistant (I’d grown quite fond of the comedienne during her stint as one of Last Comic Standing’s best judges). Add in Giles (Anthony Head, reprising his role from the Stephen Mangan-starring original version of the series) and of course I’m watching this show, no matter what brainless things the NBC promotional department has done with it.

It took me less than 10 minutes to decide that even if I didn’t end up liking the series, I was loving the pilot.

But it was the script that really caught my interest. The premise is nothing special but the characters are well crafted, the pacing good and the jokes simply marvelous. Chris Niel, executive producer of the UK original, and John Enbom, an alum of such witty series as Veronica Mars and Party Down, brought their A game to every joke in the pilot- from the zany security guard (Joe Lo Truglio) who makes home movies about the things his weapon collection can destroy, to the company’s Better Off Ted-esque PR bandaid that saw the invention of the word “Safeganic”, to a fashion critique of “you look like Willy Loman”.

Free Agents might still turn out to be awful- I’m not sure that premise is likely to hold up long term. And I’ll, frankly, be shocked if it doesn’t get axed early in favour of the more immediate hit Up all Night. But as of right now, on the backs of Niel and Enbom, the series is in pretty good shape.