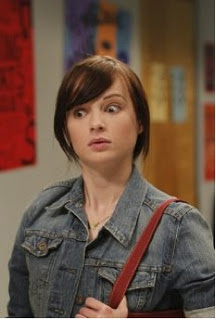 Never one to shy away from TV shows ostensibly written for people about half my age, I approached the watching of MTV’s Awkward with a mixture of excitement and shame. I should be finally watching Breaking Bad or The Wire, not indulging in the newest output of teen angst-laden ridiculousness.

However, about halfway through the first episode of Awkward, I stopped feeling guilty. If the awesome story of Jenna losing her virginity in probably the least after school special-approved way possible didn’t win me over, by the time she accidentally tried to commit fake suicide I was head over heels.

My one major criticism is that the best friend character is super annoying. It’s probably one of my least favorite teen comedy clichés to have the best friend be such a flighty skank. I’m sure she’ll grow on me, they all do, but I could still use a bit more of a convincing friend chemistry.

Is it weird that I like “Sadie Six Ton?” After years and years of fat chicks being portrayed as martyrs to high school cruelty (I’m looking at you Carmen-I’m-So-Desperate-To-Be-Popular), it was kind of nice to see a chubby chick getting to act like a huge bitch. I’m sure they’ll soften it down with explanations of “filling the void” in Sadie’s life, but I really enjoyed watching her to begin with, ruling the school and saying really mean things.

The real strength here, though, is Jenna. Played by Ashley Rickards, she’s a charming mixture of strength, intelligence, and ridiculous teenage vulnerability. I hope over the next couple of episodes, the rest of the characters start to work up to her level, because she could be one hell of a show all by herself.

However, side note: Should I be disturbed that I’ve officially reached the age where the father characters on shows like this seem the same age as me? The Dad looked like he should be the hot older guy/college student, not the parent of a sixteen-year-old. Damnit I’m old.