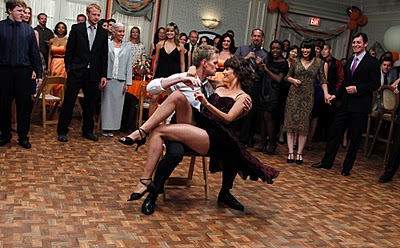 An Hour of Happiness with HIMYM

CBS’s best comedy isn’t what it once was- it’s a little broader, a little less clever, a little lazier; but that’s in comparison to what it once was, not in comparison to everything else. In comparison to everything else, it’s still one of the happiest-making things out there. How I Met Your Mother makes me smile. Not in an “intellectually, I recognize that that was a well-formed joke” kind of way, in a “can’t help but grin, butterflies in your tummy, sometimes you cry before you catch yourself and think ‘dude, it’s just a sitcom, calm down!’, stop your game of tetris” kind of way. I’d managed to forget that over the summer. But it took mere minutes of the premiere for me to remember.

Some of the jokes, particularly in the second episode of the evening, were kinda lame, but then there was an epic wedding dance routine and the line “Robin, get my legal pad, it’s pros and cons time… And kids, they really cheered!” Nora’s intensity about honesty might have been a little strained, but it led to a great recounting of Barney’s greatest hits. Marshall’s storyline about embarrassing online videos was flat out stupid, but it couldn’t change the effect of the gorgeously melancholy scene wherein Robin told Barney what to say to Nora by saying what she wanted to say to him. And Marshall and Lily’s quest to hide her pregnancy by him drinking her alcohol for her might have been ripped straight from old Desperate Housewives, but the resolution scene was just so great! Or that lovely scene between Robin and Ted on the terrace at the wedding, so good! Or the excellence of all the foreshadowing and future references we got in both episodes. Sure they didn’t get us any closer to the mother but they’re always fun- remember the goat in the bathroom?!

And though the episodes didn’t resolve who Barney’s bride is (though her asking to see Ted did point towards what I thought was the only theory worth having- Robin) and it didn’t take us any closer to the identity of the mother, we were left with Ted’s affirmation that he doesn’t want a good-on-paper girlfriend he likes enough to date for awhile, he wants the sort of stupid love you know when you encounter. My thoughts exactly, Teddy ole boy!

And then, SPOILERT ALERT, we were brought back to the show’s roots with the reintroduction of one of my favourites of Ted’s many love interests- Victoria, the baker from season one (the always wonderful Ashley Williams). It’s true that theirs was the sort of love Ted’s talking about, but it was also too easily overshadowed by his love for Robin- not a good sign. But it sure was nice to see her again.

PS: in case you’d somehow managed to forget how much of a travesty it is that these actors were omitted completely (including NPH!) from this year’s Emmy race- may I submit for your consideration Colbie Smulders’ heartbreakingly funny “I don’t want Barney back” arc and all of the premiere as a showcase for the epic Neil Patrick Harris: his comedy chops are out full force as he tries out girl-getting material at a wedding with a checklist for future reference, his dramatic acting flair pulled at heartstrings as he pined for Nora and worried if he was marrying the right girl, and his leading man charm was palpable in a hot dance number with Robin that showed off not only his magnetic pull but the chemistry between the two extroadinary actors. The Emmy Awards might have gotten a fair bit right last night but when it comes to the comedy categories, the nomination committee still needs a lot of help.