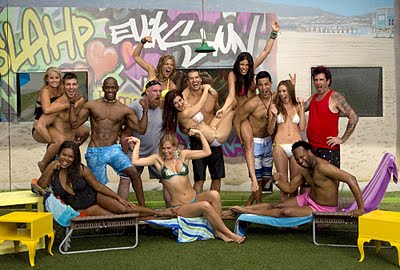 The Weird Reality of Big Brother This Year

It’s been a very up and down summer for my guilty reality fix. It started with a twist that could have been wonderful (Chilltown! The Renegades!) and ended up mediocre (The Donatos? Brenchel?) and a cast of clueless newbies who couldn’t get their act together.

Read on for my week by week recount of the summer so far.

Week One- I was 100% with the smart, grounded Cassie (and, by extension, her feisty partner Shelley). I liked Dominic quite a bit too. I hated Kalia and Porsche off the bat. While I always loved Jordan I could never root for her as a player and didn’t like Jeff enough as a person to root for his slightly stronger gameplay. Rachel and Brendan annoyed the hell out of me, always had, but their strength was impressive. I had residual hatred of Dani from season 8 that I couldn’t shake- I thought her dad was overrated and she was just plain icky (though the allegations that she lived in the shadow of his “brilliant gameplay” were 100% crap from the get go). Glad to see Keith go because he was intolerable. Sad to see him go because it meant bad things for the only people I liked (mainly Cassie- who could have proved a great great player).

Week Two- I’m torn. It’s Jordan’s HOH and she’s so damn sweet that she does what her alliance says and votes out someone she 1) really liked and 2) could have worked with if she had any sense of perspective at all. So Cassie’s gone. Damn It. But, Cassie had aligned herself wrong (and got a little unlucky with Rachel’s jealousy issues) and at this point I was on team Jeff/Jordan. Cassie staying would have been good for Dominic and Dani’s alliance and meant the earlier downfall of the cute couple. My residual dislike of Dani gave this idiotic eviction a slight silver lining.

Week Three- The predictable follow up to week 2’s folly. Dominic (the only other newbie I really liked) goes home, securing Jeff and Jordan’s safety and leaving Dani in major danger- my thoughts on the houseguests remain steady (though Rachel and Brendon are growing progressively more difficult to tolerate).

Week Four- Dani turns it around. Maybe it’s the black hair or that she looks like a human being now instead of a paper doll, maybe it’s the fact that she sees Big Brother as a game and got bored when it got too easy. Either way, Dani is a different girl this season and it was week four when I began to realize that. Her first week back in competitions after the frustrating golden key twist (it could have been really interesting but it came out inconsequential, like most twists), Dani swiftly takes HOH and sets about getting the job done- evicting a strong member of her former alliance, Brendon. Calm, cool, collected and damn efficient- girl gets her way and gives me someone deserving to cheer for, Thank God (or Donato).

Week Five- Big Brother screws it all up. Or maybe it was America. Or Kalia. Or all three. Kalia is HOH. While she’s made up the ground she lost early on by being annoying and somewhat useless, Kalia still isn’t a standout player. I think she’s getting too much flack for being a floater though- she’s nominating along alliance lines, not just because Dani tells her to. In fact, she would have been better off if she’d listened to Dani a little bit more (Jordan, on the other hand, would have had a better HOH if she’s ignored her alliance). So Kalia’s in my good books but I’m mostly with her for Dani’s sake and when she completely bungles her HOH I’m fairly annoyed with her. The problem was, she bungled it because Big Brother freaked her out. They declared that the person evicted might be able to come back into the house and since the houseguests seemed to mutually decide to turn the word “might” into “will”, Kalia got scared of pulling the trigger on evicting her target, Rachel. So place-filler Lawon goes home- no one wins, no one loses and the whole week is a waste. I’m torn between an affection for Jeff/Jordan and a respect for Dani but otherwise no one’s in my good books. (In case you’re wondering where the heretofore unmentioned Shelley and Adam stand- he’s weak and she’s wishy washy. For a student of the game, he can’t seem to play it and she’s playing a pretty solid game actually but the self-righteous declarations and revisionist diary sessions are undermining it and getting on my nerves). The week caps off with the follow through on a twist that could have been great but America is dumb so it wasn’t great at all. When given the chance to vote a player back into the game, idiotic Big Brother fans went with familiar face Brendon instead of Cassie or Dominic. Naturally, he beat Lawon in the faceoff and re-entered the house. This was sort of good for Jeff/Jordan, really good for Rachel (but who cares) and horrendous for Dani and her alliance. So I’m mad. Because no twist at all would have been just fine. The twist if it had been Cassie (or even Dominic) would have been great. This twist, this just sucks. Because Lawon’s eviction was so meaningless, this literally set the clock back 2 weeks to before Dani and her alliance stepped up their gameplay. There’s a real unfairness to that.

Week Six- Dani makes up the lost ground. Or at least she tries. She wins HOH, makes solid nominations that leave her options open, gets a little lucky with the veto and backdoors Brendon. An almost perfect HOH. Too bad she couldn’t use it to move forward instead of re-treading old ground.

Week Seven- Reciprocity. The tides turn and I’m still a little torn. I’m always glad when Jeff and Jordan are safe and he really did use his HOH well- he played it almost as perfectly as Dani’s previous one, to tell the truth. But his making strong game moves also meant the demise of the only player I was really interested in watching. So Dani goes down (as we knew she would the second her alliance lost the power they’d held for 3 weeks straight) and the house gets pretty boring pretty fast. But for the double eviction night Kalia steps up (with a little help from Porsche’s veto win) and pays the other side back by evicting their leader moments after they evicted the leader of her side. So, 2 HOHs in a matter of weeks (even if one was bungled), strong nominations the second time around and a lot less whining than usual- I think Kalia just might be the person I’m cheering for now- how bizarre is that?

Where We Stand Now- Porsche won HOH, opened Pandora’s box, unleashed a week’s worth of the duo twist and made the week more difficult on herself by giving Rachel and Jordan a chance to save each other with just a single veto win. However, Shelley being currently on the bottom rung of my favourites ladder, I’m sort of okay with that. Though I just read that Jeff’s eviction has sparked threatening phone calls to Shelley’s family so now I’m defensive of the poor woman and not wanting to say anything bad about her (seriously people?! screw your heads on straight- it’s Big Brother for crying out loud!). So, the remaining houseguests fall as follows:
Kalia: probably the smartest player left but the last person I would have pegged early on as who I would root for. Alas, she’s my current pick to win (for being both a decent player and a tolerable tv character).
Porsche: my least favourite in week one has finally shown up in this game and I don’t hate her at all. She spent some time on each side but made strong decisions about where she wanted to be and followed them even if they were risky moves. It was just a matter of time before she stopped coming in second.
Jordan: There’s a reason this girl’s a fan favourite, it broke my heart this week to see her so heartbroken. Nevertheless, the former winner doesn’t seem to have a concept of this being a game and takes things way too personally. But, in her defense, she didn’t come here to play, she came to spend the time with her boyfriend who lives several states away from her. And now that boyfriend’s been suddenly voted out without giving her a chance to process. She feels betrayed by one of the few people she trusted (Shelley) and now is left without her sanity/sounding board/more intelligent half. You just feel bad for the poor girl.
Rachel: She’s annoying as hell but she’s a fighter and this week you can count on her to show up to play. She also had some rare and inspiring moments of sanity in last night’s episode, pulling Jordan away from confrontation, saying “this isn’t you” and staying out of all Shelley-related blowups. It was out of character and really showed her good side. I wish that version of Rachel would show up more because there really are things about her that I like.
Adam: He’s funny and well-intentioned and a terrible terrible Big Brother player. He needs to be voted out really really soon (interestingly, making it an all-female house). I have no idea how he’s lasted so long but I like the guy and he’s clearly trying.
Shelley: Gameplay like Shelley’s is almost reminiscent of some of the great players of the past (season 3’s Danielle, the famous Will, the unanimous winner Dan- the great liars). The difference is that they all played with a wink and a smile. They knew what “good person” rules they were breaking and weren’t sanctimonious about it. They played the game like chess and if they got hurt along the way they picked themselves up and said “hey, all’s fair”. Shelley has manipulated and cajoled her way onto all sides of the house- it really has been an impressive game. But she’s pushed a little too hard and been found out at a couple key junctures. Blocked into corners she has this weird reaction of bursting into tears and yelling at her confronters accusing them of not believing or trusting in her. She plays the guilt card more than I can possibly tolerate, chastises others for her own worst qualities and doesn’t bring the audience into her scheming world. She’s not wickedly fun like the other great players with their calculated plans and honest diary sessions. Shelley’s more a Jeff-like player, hell bent on never lying, who doesn’t know that she’s better than that. It’s a weird phenomenon but not one I’m really all that invested in watching play out.

It’s been a strange season. I’ve never quite known where my loyalties lie, the role of my favourite having bounced between sets of enemies at least 4 times this season. Big Brother, this isn’t what I had in mind when I suggested a battle of alliances. Mixing newbies and vets isn’t a winning formula, just give us one or the other. Oh, and pick better veterans next time.