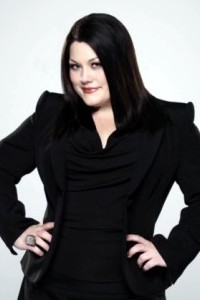 Drop Dead Diva is sort of a pet show for us here at My TV. We love it unconditionally, nudge it along whenever we can and aren’t afraid to scold it when it digs up the flowerbeds. But as it returns for a so-far very strong season three, we’re happy to report that there’s no scolding necessary, just warm cuddles and a few laughs.

My TV Award nominee Brooke Elliott is back and bubbly-sweet as ever as the body-swapped Jane/Deb hybrid. Whether she’s belting out a showtune, putting the smackdown on a powerful corporation or gazing heartbreakingly at her prodigal soul mate Grayson, Jane is as sympathetic a heroine as can be. Sometimes her Deb-ness gets to be overwhelming but the writers always give her something like that superbly self-worthy voicemail scene to remind us that she’s got even more spine than she does sparkle.

The biggest dynamic change heading into the Lifetime series’ third season is the coupledom of Jane’s confidantes Fred and Stacey. To hell with Sam and Diane, I am loving the stability of this relationship. Independently, Fred and Stacey are my favourite characters on Diva and showrunner Josh Berman has found a way to make them a unit without sacrificing any of their individual awesomeness. Rather, they’ve quickly sunk into a comfortably sweet routine that allows them to explore their own stories then come back together for a one-off episode about Fred faking having a mother. The highlight of their relationship story so far was the wonderful awkwardness of Jane giving Fred way-too-intimate/incredibly helpful hints about Stacey’s “preferences”. Given Jane’s level of intimacy with both characters, there’s the potential for a never-ending supply of funny stories for Fred and Stacey as a low-key and stable couple. Here’s hoping the writers allow them to be the Monica and Chandler, leaving the dramatic stuff to the flakier couples.

The season so far has been rife with delights from a surprise appearance by Louis Van Amstel as Teri (Margaret Cho)’s dance partner (you’ve got to love the meta fun that shows like Dancing with the Stars make room for) to the short but sweet and character-affirming arc of the BFD (Boyfriend Doctor), Ben Shenkman. The case against the sperm bank was probably my favourite law story so far (wonderfully touching), and while I’m glad Grayson didn’t get married, anyone who thought he actually might doesn’t know the first thing about scripted television.

I couldn’t be more thrilled to have Berman and his happy-go-lucky crew of adorableness back in my life every week. I can’t wait to see where they go from here.