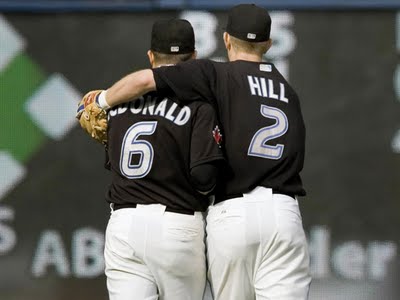 Aaron Hill and John McDonald may not be the best baseball players ever to don Blue Jays uniforms but they are and always have been, without competition, my favourite players to do so. With their recent trade to the National League Arizona Diamondbacks, it’s unlikely I’ll be seeing my boys play live again for quite some time. It’s been said over and over again that Johnny Mac (and possibly Hill) is looking to come back as a free agent next year but, no matter how short term, losing both is a major blow to my love of the team.

Since he took the job, current GM Alex Anthopoulos has made a ton of moves. Very shrewd moves, lacking entirely in sentimentality. As a student of the game not for its competitive thralls but rather for its metaphorical value as the only true team sport and for the sheer joy of getting to know and love a team for the personalities who make it up, it’s the sentimentality that brings me back season after season. I love loving the players and feeling like they’re playing for me, that we’re on the same side. I’m a Jays fan and always will be, but more so than that I’ve been on team Aaron Hill since the moment he came up to the majors. With my loyalties now divided between my boys and my team, the baseball experience has lost a little of its luster.

For them, however, baseball is baseball and the chance to play the game, anywhere, is one they won’t take for granted. What makes my boys so great is that they love nothing more than the game of baseball, no matter who they play for. In Johnny Mac’s case he’s ridden the bench for years, his superhuman fielding never getting him past the role of someone else’s backup; but every day he’s the first man out of the dugout warming up, tossing the ball around, getting ready even if he’ll only play a single inning. Hill’s always been the same way. While others meander to their position, he hits the field at a steady, enthusiastic jog whether he’s just hit a homerun or struck out for the third time that night. They’re sportsmen, beloved Toronto icons, 7-year Jays and baseball fans in the truest way.

Though I grew up with baseball, I wasn’t the fan I am today until 2005, the year both Johnny Mac and Aaron Hill came to the Blue Jays. And ever since, they’ve represented my love for the game. I was at the ballpark the day Aaron Hill stole home. I was there too when John McDonald hit is famous father’s day homerun; I was there with my own dad. The first real conversation my best friend and I ever had was about our mutual love of Hill (then only a one-week major leaguer) and my politico brother has long joked about bringing a “John McDonald for Prime Minister” sign with him to the ball game. I have Hill’s rookie card (a present from the aforementioned friend), signed by my favourite player. And when I met Johnny Mac earlier this year he was hesitant to autograph a baseball already bearing the signature of superstar Jose Bautista, he was afraid of diminishing its value- that sort of out-of-the-park grace is unfathomable in most pro athletes, but it’s commonplace for the most popular Blue Jay.

I could write forever about what makes Aaron Hill and John McDonald special baseball players. I could do that without even mentioning their game play- Hill’s historic 2009 all-star season, his inspiring comeback after a devastating concussion, his perserverance through tough slumps, his amazing arm. McDonald’s versatility as an infielder, his recent improvements at the plate, his impossibly great fielding percentage, his perpetual highlight-reel plays.

Suffice it to say, while I’m thrilled to see them finally get some post-season play potential, it hurts my heart to see Hill and McDonald out of a Jays uniform. But as they join fellow former Jay Lyle Overbay on the Diamondbacks, at least they’ll give me someone to root for come October.

Thanks Aaron and Johnny for 7 years of inspiring gameplay and sportsmanship that fostered my love of baseball more than any other player ever has. I will cheer for you forever, no matter where you go.