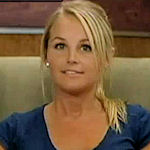 This was YOUR Head of Household. Not Jeff’s, certainly not Brendan’s or Rachel’s, YOURS. So who ends up on the block? The last people you wanted to nominated. I understand that Bruno Mars Dominic using the veto put you in an awkward spot (I didn’t want him to leave though, so I’m sort of glad he won) but you had two viable options and you went with neither of them. A great player would have put up Brendan and Rachel and kicked her annoying competition-winning butt to the curb (they’re going to be hell to get out down the road). A much less brave but still competent player would have used this week to show her aliance that she can’t be bullied and put up Lawon and Kalia, it wouldn’t have been a big eviction but it would have strengthened your position in your alliance and prevented the eviction of a major potential ally (aka Cassie aka the person you SHOULD be playing this game with). Dani’s not really in this right now and Jeff was cool with any of the options, so what you just did was tantamount to handing Rachel the HOH. You put up someone who had your back because Rachel doesn’t like having a prettier girl in the house! I swear, if Cassie goes tomorrow you will absolutely regret it. Do NOT vote with “your alliance”, they certainly wouldn’t vote with you if the roles were reversed.

Love,
Your fans at My TV
(we really do love you, we just worry about you sometimes)

PS: I fully expect you to vote with your alliance. See ya Cassie, you could have been a truly great player!