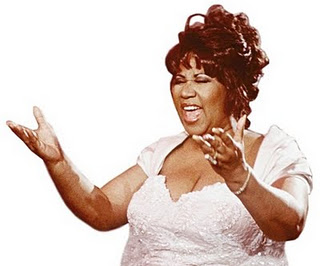 Live from Toronto, it’s the Queen of Soul

On Friday, a legend infiltrated David Pecaut Square outside Metro Hall to kick off the Toronto Jazz Festival with a free outdoor concert. From only a few meters away it was hard not to notice how much the 69-year-old cancer survivor has slowed down in recent years, her clear booming voice not quite as clear or booming as it once was. Nevertheless, it was a thrill to see the one and only Aretha Franklin live.

Decked out in a sparkling white gown, Ms. Franklin was every bit the commanding presence you might imagine, if only because of the deference of her awe-struck audience. As she crooned iconic melodies like “Think”, “I Say A Little Prayer”, “Bride Over Troubled Water” and, perhaps most famously, “(You Make Me Feel Like) A Natural Woman”, Franklin had the entire audience under her spell, that of being in the presence of a living legend.

To the astonishment of the crowd, who waited long after her curtain call for the possibility of a surprise second encore, she never sang “RESPECT”, the song that she’s best remembered for and that no one will ever sing quite as well. But somehow that didn’t actually matter all that much. Because when, only a few months after major surgery, Aretha Franklin sat down at a piano and jammed, wailing riff after riff into the air, the massive crowd of Torontonians could do nothing but scream her name.