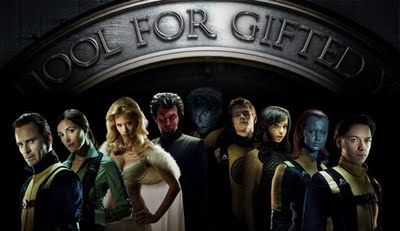 Kelly recently reviewed the excellent Thor and in her review mentioned that I’m a bit of a superhero nerd. I actually think I’m the perfect amount superhero nerd: knowledgeable enough to enjoy the films and add a bit of depth to moments like Cyclops saying in the first X-Men, “What would you prefer, yellow spandex?” But I’m not so much of a nerd as to be bothered, or even really notice, continuity errors or changes from the originally, especially not in Marvel properties. As such, I’m exactly the audience Marvel wants for these movies: enthusiastic to the point of rabid, yet easy-to-please.

And the thing about Marvel is, with few exceptions, they’ve been doing a damn fine job of pumping out movies that both provide fan service and truly good, serviceable films. Mostly, they do this by hiring people actually suited for the job. On Thor, the man who it turned out could best bring to life the grandiose absurdity of Asgard was Kenneth Brannagh, and the only guy I could imagine balancing on the tightrope of slapstick fish-out-of-water comedy and hubris was Chris Hemsworth. For X-Men: First Class, that’s Michael Vaughn (Kickass) as well as stars James McAvoy and Michael Fassbender.
About halfway through First Class I found myself wondering if the movie was going to suffer from what people refer to as “prequel-itis.” This occasionally debilitating disease robs films of their dramatic tension, due to the fact that we all know how they end. But the knowledge of where Magneto, Mystique, Professor X and the others end up adds an element of grandiose tragedy to the buddy story, even in its most lighthearted moments. Enjoying that montage where Fassbender’s Magneto and McAvoy’s Xavier exude a cocky enthusiasm as they track down mutants? Flash forward to Ian McKellan locked in a plastic prison at the beginning of the first film.

On top of that, the reliance on WWII and Cold War imagery adds an element of realism amongst the blue-skinned mutant shenanigans. It really helps to tease out the X-men themes of belonging, acceptance and honor.
X-men First Class is not a perfect movie (in comparison with Magneto and Xavier, for example, Mystique as the third side of that triangle seems underdeveloped), but it’s a solid, exciting, well-developed outing that continues X-Men‘s casting hot streak. It’s too bad the opening weekend box office didn’t match that of recent smash The Hangover II, but if Marvel continues to be have the best studio quality record short of Pixar, I’m looking forward to even more chances to reenter the marvel universe.

GEEKY SIDENOTES (here be spoilers!):
* I liked the government precursors to S.H.I.E.L.D.
* Jennifer Lawrence’s ageing up into Rebecca Romijn was all sorts of brilliance
* Kevin Bacon?! KEVIN BACON!