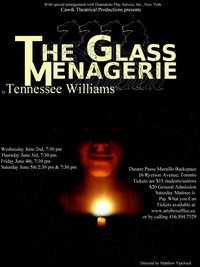 The summer after he graduated high school, Matthew Yipchuck and his friend Catherine Bernardi founded their own theatre company. This past summer he directed their first full length production by an established playwright: Tennessee Williams’ The Glass Menagerie. Now he’s nominated for a 2010 My Theatre Award for Best Director in the independent/local division. The Glass Menagerie is also up for Best Production.

Read on for Matthew’s thoughts

My first memory of theatre is seeing The Wizard of Oz when I was 2. I started acting when I was about 13 and did my first writing and directing in grade 11 when I did the Sears drama festival. I started self producing when Cawrk started in 2006.

How did Cawrk get its start?

It was a transitionary summer for me and my friend Catherine [Bernardi] after we graduated high school and before we started at York University. We didn’t feel like we were done with theatre yet but no one wanted to mount our show, so we thought “let’s do it ourselves”. We booked the Mississauga Theatre and remounted our original productions that we’d written for the Sears festival. We contacted local companies and put together a sponsorship package. We were really lucky, we had a lot of help. People are a lot more supportive than you’d think.

Instinct. I used to put up plays in my backyard as a kid. I’ve always really liked storytelling. And I found whenever I was acting in a production I always want more creative control.

How do you pick your projects? Do you choose them with a specific vision in mind?

A lot of it is circumstantial. What’s great about starting your own company is that when you have an idea for a show you can just go ahead and do it. With The Glass Menagerie I was intrigued by the idea of using title cards, like in silent film. I studied film in University so it was an interesting way to culminate everything I’ve learned. I love the freedom of getting to tell a story the way I want to.

I have an idea for Cabaret that I’d love to do. I’ve never directed a stage musical. I love the underlying darkness of that show, it’s about what’s not being said. I would set the first act before the Nazi rise to power and the second act during the occupation. I’m interested in maybe doing it next summer, at least in the next 1-2 years. I’ve also always wanted to do The Tempest set in space, playing on sci-fi with some of the supernatural themes.

Do you try and go to the theatre often? Is it helpful to view the work of other directors? If so, what have been some of your favourite productions?

Definitely. It’s so beneficial to see other productions, it helps you really understand what you find impressive. I see about a play a week when I’m in Alberta [(for school)]. There are a lot of small companies like Cawrk out there. Sometimes those are better because with the big companies there can be a sense of conventional comfort, they can get into a bit of a creative rut. I like independent companies for that reason, they tend to avoid that a bit more.

I saw Priscilla Queen of the Desert recently. That was fantastic. It’s pulling in mainstream crowds and showing them what they wouldn’t normally see. It’s great.

Walk me through casting- were they easy decisions to make or did you struggle filling some roles?

I always thought Catherine would make a really interesting Laura. I knew she wanted to do marketing for the show or stage manage, so I didn’t want to ask her, but she ended up being great. We had sort of conventional casting for the guys. Their auditions were magical. Eze was particularly interested in the part of Jim so that worked out well. Josh [Dolphin] was a bit of an unconventional choice for Tom but I knew it was him because I asked all the auditioners who they thought he was telling the story for and he immediately answered “I’m talking to my dad”. Finding an Amanda was hard. Most older actresses are unionized or wouldn’t drive in for a non-paying job. But I had a friend who raved about Ingrid [Wirsig]’s audition for a film he was working on so we ended up getting her. It was my first time working with an older actor so it was intimidating but a fantastic learning experience.

We rehearsed 3 days a week (about 15 hours a week) for a month and a half. We worked on finding the characters from the very beginning. We put together a basic framework for the blocking then it was a lot of discussion. Almost everything was imaginary, in terms of set and props, so a lot of it was asking “how does spacing affect you?” It was a lot about accepting the physical space.

What are some of the things you brought to the play that were unique to your production?

The choice to use mime or fake the props was on purpose, not just a budget thing. The absence of props really showcases the actors. Also the way it was so linked to silent film mentality, the mise-en-scene from screen was something that was new in our production.

As a director it’s really about what speaks to you. The only reason to do your own production is because it has a specific meaning to you. Something that was really important to me for this production was the quote “go to the moon you selfish dreamer”, that element of escape vs. facing reality.

What was the biggest challenge in getting this production on its feet?

The time factor was both a blessing and a challenge. It was a bigger scale production than we’d ever done before (we’d only produced our own work or one act plays before). But I learned that it’s really best to serve the play and do it justice with your own creativity, not to overreach or be overwhelmed.

Do you plan on continuing in theatre or focusing on film?
[Matthew holds a BA in Film from York University]

I try to do as much, creatively, as I can. I love all roles with both mediums. They’re both valid art forms with their own strengths for advancing stories.

I’m in the acting program at the University of Alberta. I’m also working on some short film screenplays. I try to do at least one film a year, do that degree justice. I’m also always brainstorming ideas for Cabaret and The Tempest and familiarizing myself with dramatic literature in general- educating myself.

If you could pick one definitive moment in your work in the theatre up to this point, what would it be?

There’s a moment in The Glass Menagerie when Tom and Laura are dancing, the music swells and the lights go purple… It was my vision, created with the help of other people. Seeing it all come together in that moment was so great.

I think it’s really important to try and find what’s interesting outside of conventionality. There’s a strong conception that only certain types of art actually matter. But I think there is a lot of value in lighthearted things (like the Muppets) as long as they’re trying to say something. I’m always defending things like Legally Blonde, why can’t we laugh and have it be meaningful? Surrealism, absurdism- the idea that “I don’t understand it, therefore it is stupid”, everyone needs to be more open minded!