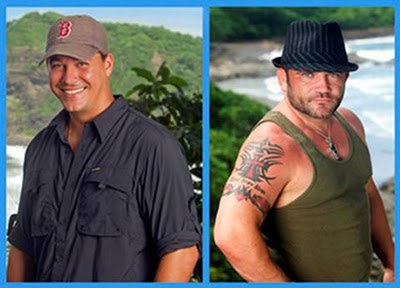 At the finale of Heroes vs. Villains, Jeff mentioned it might be fun to have the two power-player rivals back to go head to head one day. On February 16 we’ll finally get to see that as the 16 new Redemption Island castaways are joined by two of the greatest players ever to play Survivor.

First, there’s Russell Hantz. The small little troll man is an imp of deception and manipulation. He steals, he cheats, he belittles the other castaways to within an inch of their self-worth. And he does it well. He’s played twice: Samoa and Heroes vs. Villains, and never not made the finale. He’s also never won the game. A lot of people say it’s because his social game isn’t as strong as his strategic one, others that the jury voters are always just bitter and stupid and never reward the right person. While I agree with the latter for the Heroes vs. Villains vote, Parvati should have won, Sandra didn’t do anything. I really think Natalie played a really solid game in Samoa. She did the dirty work and strategizing (she did!) when she had to, and played used Russell as much if not more than he used her. She deserved the win. Russell’s challenge will be fixing that last piece missing from his impressive game play. Russell has become the icon of recent Survivor history. There have been 4 seasons since fall 2009, he’s played in 3 of them. If he makes it to the finals this time around it’ll be a record. Rob, who premiered in season 4, has the history of the game behind him, but Russell’s got the current climate dominated (not to mention he outlasted Rob by 21 days in Heroes vs. Villains).

As for Rob, he’s really three famous Survivor players in one. There’s Marquesas Rob from way back when the series was only in its 4th season. He was rough around the edges, manipulative, and voted out early. Then there’s All-Star Rob, the 10th place finisher was inexplicably brought back for season 8’s assembly of “the best of the best”, and it’s a good thing he was. With villainous strategy he’d only gotten to show hints of in Marquesas, Rob dominated All-Stars. The catch, though, was that the 25-year-old single guy who was only looking out for himself the first time around fell in love on All-Stars. He was a villain to everyone else but Rob played white knight to his one ally Amber, negotiating their way to the finale and winning her the money (yes, I insist that it was 100% his strategy that led to her win). He proposed on the finale and they’ve been together ever since (getting married on TV and running the Amazing Race twice along the way), Amber recently gave birth to their second child. So when he came back for Heroes vs. Villains, Rob was understandably a different guy. He hadn’t played the game in 6 years, was in a totally different place in his life, and was confronted by strange new twists that had been added since All-Stars (the biggest of which was Russell’s iconic tool- the hidden immunity idol). Despite being on the Villains tribe, these factors meant one thing for Rob’s gameplay: he played like a Hero. He powered through challenges, taking on a leadership role (like oldschool Colby) and negotiated peaceful tribal voting and a sharing of the inconvenient immunity idol. But the game isn’t played that way any more, the great and obvious, powerhouse heroes don’t win anymore. Rob was voted out 8th and didn’t even make the jury. But much like his 4th place finish on The Amazing Race:All-Stars, Rob ran faster than everyone else, he just got knocked out.

Notoriety will be a major hurdle for both players to overcome but I think Rob’s might work in his favour and Russell’s against him. When he played Heroes vs. Villains, Russell’s season had yet to air, he’s never played this game as a famous player- his villain reputation will hurt him a bit. However, he’s won Fan Favourite every time he’s played, it’s possible that everyone will be clambering to climb on his back. Rob, however, proved himself a good leader instead of a backstabby player in Heroes vs. Villains. If they’re smart, his team will keep him at least to help them to the merge. My prediction is that Rob will do very well and Russell go out early. But history is very very much not on my side in that prediction. So we’ll see.