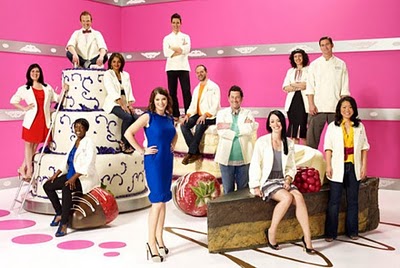 2010 was an up and down year for Top Chef. Coming off their best season yet in late 2009, the Bravo series started 2010 with a Washington DC edition. It was at once their kitschiest season to date, and one of the least interesting. The season did feature an engaging personality in Tiffany and an entertaining one in Angelo, as well as the hilarious “scandal” of the stolen pea puree (oh my!), but the contestants were generally less than interesting and the food generally less than impressive. To top it all off, the win went inexplicably to hot-headed Kevin (who was in the bottom no fewer than 5 times over the course of the season and won only 1 challenge). On a brighter note, even though Eric Ripert is not exactly an enthralling permanent judge, at least this season marked goodbye to the vile Toby Young.

Next came Top Chef: Just Desserts. In contrast to it’s parent show’s mediocre 7th season, the spinoff’s 1st season was wonderfully entertaining. As a whole, the series lacked the heat and bad-assery of the original (which is what happens when you take away knives and fire and replace them with mixing bowls and piping bags) but it didn’t need to be hot to be entertaining, because it was delightfully bitchy. Yes, apparently pastry chefs are more cliquey, snippy and divalicious than American Idol singers, Project Runway designers and Top Models combined. It was fabulous. From glittery Zac to bitter Heather to childish loner Danielle, the contestants were hilariously diverse. Early on, passionate lunatic Seth kept the audience riveted with fantastic outbursts like the instant classic “the red hots are for my mommy!” (though I still maintain that he’s very talented and well-intentioned, he just needs a therapist, and to not be on national TV). Once he was gone, attention switched to the totally mature rivalry between the in-crowd: Zac, Yigit and Heather H (wonderfully named “Team Diva”) and the outsiders/underdogs: Danielle, Morgan and Eric (they had no official name, though “Team Loser” was certainly thrown around as a possibility). Adorable baker Eric unfortunately left early-ish from the underdogs, but they ultimately triumphed over Team Diva when Danielle controversially beat out Zac for the 3rd finale spot. In the end it came down to the 2 best contestants of the season: Yigit, the adorable Turk with the baby face and the perfect technique, and Morgan, the manliest man ever to design a handbag made of buttercream. Despite the fact that Morgan had 3 elimination and 3 quickfire wins going into the finale compared to Yigit’s 1 elimination and 1 individual quickfire, it was anybody’s game (Yigit’s technique and ambition had made him a front-runner from day 1, while Morgan had been a dark horse). Ultimately, Yigit took the prize (and the “fan favourite” title), which was deserved, appropriate and the perfect ending to a fantastic season. Also: Johnny Iuzzini… ‘nough said.

Next up, the knives and fire came back… and so did a big pile of losers. Literally. It’s All-Star season, so all the contestants are former losers. That means that we get some idiots that should have just stayed home (I’m talking to you Dale Talde, at least just stop talking), some popular contestants way out of their league (Fabio, Spike) and some great chefs who just flat-out didn’t win first time around (Carla, Antonia, Angelo, Jen). We also get back my favourite contestant of all-time: Richard Blais (who HAS to win this thing). 5 weeks in there are 12 chefs left. Angelo’s winning the win/judges’ favourite count with 2 wins and 2 weeks in the top, though Richard’s just one win behind after having been disqualified week 1 for going over time. Look for Jamie to go home next (she was my favourite in her season but I’m so disappointed with her in All-Stars) with Fabio close behind. Also I expect a dark horse like Carla or Mike to make their way to the finale against expectations. On the judging front, the permanent table is solid this season with Padma, Tom, Gail and the ever-entertaining Anthony Bourdain.

It may have had a rocky start in 2010 but the superb new spinoff and a solid-if-not-fabulous start to All-Stars has put the series in a good place for 2011.