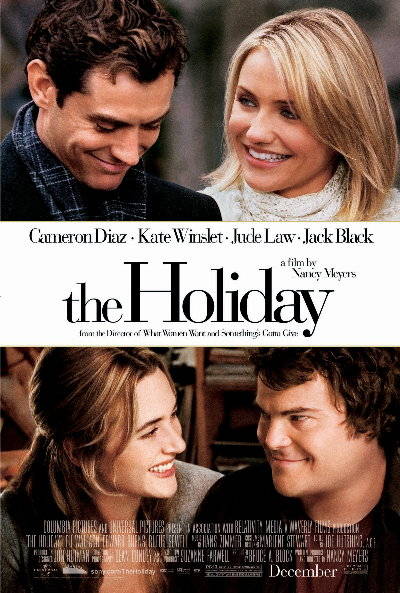 The Holiday, in many ways, is exactly what people are complaining about when they bemoan the death of the modern romantic comedy. It is about to unlucky in love women who swap houses for the Christmas holiday and subsequently meet new men and have their lives change. Along the way, the women flop about, drink too much, monologue their feelings out loud, and generally make a fool of themselves.

On another hand, The Holiday is also what people think of when they think of a bad Christmas movie. IT takes the Christmas holiday and uses it to elevate an otherwise unremarkable romantic comedy. The movie has nothing profound to say about Christmas, or innocence, or religion, it merely uses the green and red background to inspire in its viewers a sense of homey nostalgia.

And yet… I sort of love it. You’ve got Cameron Diaz doing what she does best (sassy girls doing goofy physical comedy), Jude Law at his smarmy English best, and Jack Black giving the most understated and endearing performance of his career. Kate Winslet, as Iris, is certainly good-enough, but in a career like Kate’s it’s hard to really take note.

On top of that, the characters are surprisingly sharp and interesting, and the dialogue good enough and snappy enough to allow the actors to show off their talents. It’s in many ways a lowest-common-denominator movie, but made well enough that you can enjoy the Christmas-coated fuzziness of a movie that also includes not just a wise-beyond-her-years-motherless-daughter but ALSO a wise-as-is-appropriate-to-his-years-grumpy-old-man.