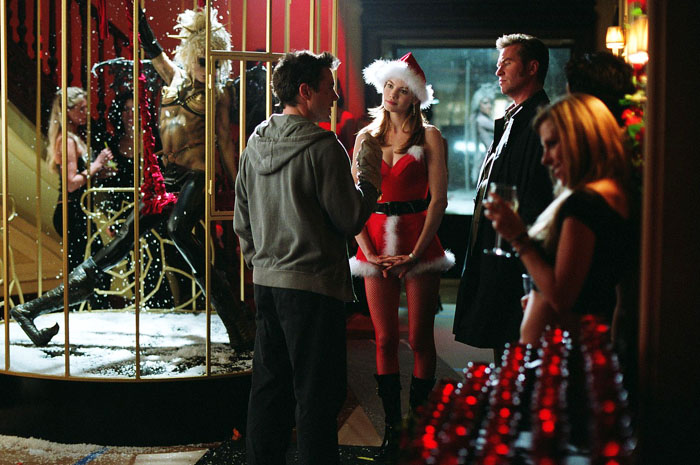 Kiss Kiss Bang Bang is definitely one of my all time favorite holiday movies. The story is of a criminal (Robert Downey Jr.) who, through a series of misadventures ends up being groomed to play a Private Eye for a Hollywood movie, and gets caught up in a real life film noir involving a murdered heiress, a long-lost love, Hollywood shennanigans, and a giant robot.

It’s written and directed by Shane Black, who made a big name for himself in the 80s when he wrote movies like The Long Kiss Goodnight and Leathal Weapon, and practically held the patent on witty action movies. And it’s even funnier and actionier than those credits would imply.

Robert Downey Jr. is in his element as a the dull-witted, fast talking unlikely action hero and Val Kilmer is legitimately better than he’s ever been as Gay Perry (the private detective consultant working with Downey). Michelle Monaghan as the struggling actress love interest is fantastic, the perfect mixture of old school noir sexy and new school neurotic.

At their hearts, Christmas movies are about the sadness of life mixed with the hope that the annual family get together can somehow change the course of your life. In Kiss Kiss Bang Bang Robert Downey Jr. meets up with his childhood sweetheart (his version of family) and suddenly the same downward spiral that has characterized Harry’s life thus far is broken.

The combination of film noir, Christmas absurdity, and post-modern verbal diarrhea turns into something uplifting, amusing and surprisingly wholesome for a movie with lots of boob-shots and casual f-bombs.

Perry: Look up the word idiot in the dictionary. You know what you’ll see?

Harry: a picture of me?

Perry: No. The definition of the word idiot, which is what you are!

Harry: Man I feel sore. I mean physically, not like a guy who’s angry in a 50s movie.”