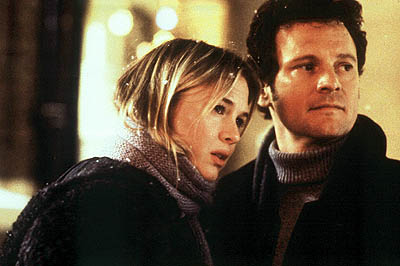 Today I indulged in a double feature of movies that I have always associated with Christmas, even if they’re not the typical type that grace best of Christmas lists. But both of the following films have famous climactic scenes that take place during the Christmas holiday and that wouldn’t have the same poignancy without their festive surroundings.

The first of these two was one of my all time favorite “guilty pleasure” movies, Bridget Jones’s Diary. The tale of perenial singleton Jones, manipulative but sexy Daniel Cleaver, and dream boat Mark Darcy has brought many a-chuckles to single ladies the world over. But it’s the iconic drinking-alone-set-to-“All-by-Myself”-at-Christmas scene that has always stuck with me. That plus the Christmas sweater that is Mark Darcy’s introduction has always steeped Jones in christmas depression and hope simultaneously.

The second of my abnormal Christmas movies is When Harry Met Sally, a movie bookended by bittersweet New Years Celebrations, also makes my Christmas list. Despite the fact that the movie spans years (and therefore certainly has a scope bigger than just the Holiday season), it’s the sense of occasion and romance that elevates some of the biggest moments.

I know that neither movie is really a Christmas movie – neither features a major subplot involving Santa Claus nor an adorable little girl who has her faith in humanity reaffirmed, but they both use the context of the holidays to heighten their characters emotional distress and draw them towards act of over-the-top romance. And they ultimately put me in the right seasonal mood, full of hope and occasion.