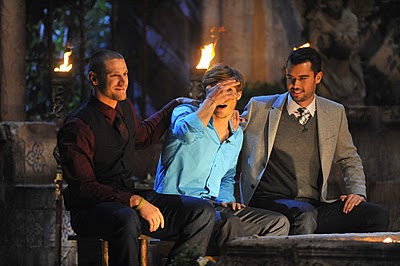 With 2 great offerings this year, the ultimate reality show still reigns supreme 21 seasons in. The institution, still hosted by best-in-the-business Jeff Probst, kicked off 2010 with possibly their best idea in 10 years: Heroes vs. Villains. The season brought back Survivor icons like Colby and Jerri, fan favourites like Rupert and Boston Rob as well as some of the best strategists ever in Russell and Parvati. Despite the tragically early departure of Boston Rob (one of the all-time best players), some bad game by My TV’s favourite would-be couple Jerri and Coach, Colby’s melancholy journey, and the completely obscene ending (it should have been a landslide for Parvati, who played a near-perfect game, Sandra shouldn’t have even been there), Heroes vs. Villains was still an unbelievable season. That moment when Parvati pulled 2 idols from her sock, gave them both away and completely flipped the game will not soon be forgotten.

Mark Burnett and Co. followed that up with a pretty decent offering this fall, Survivor: Nicaragua. Plagued with terrible twists early on (tribes by age, the medallion of power), the season quickly sorted itself out and gave way to some wonderfully engrossing characters. NaOnka quickly surfaced as one of the series’ greatest villains (and redeemed herself as the only juror to show any grace or perspective at final tribal- an unbelievable moment), Marty as a keen strategist and Jimmy Johnson as a strange celebrity sacrificial lamb. The grotesque (though strangely popular) Brenda was happily cut early-ish and the overly-fiesty Jane taken down as well to be replaced by a band of strangely excellent game players. Other than Chase (the annoyingly successful flip-flopper/coaster who quickly became my least favourite), the final 4 were all great players and fun characters. Holly, the sleeper agent of the season, played an immaculate social and physical game until those final weeks when she lost her strategic edge, Sash made some of the most impressively subtle maneuvers I’ve ever seen to ultimately hold more power over the course of the season than anyone else and Fabio, my favourite by far, had everyone (including most of the audience) fooled into thinking he was a lot less than he turned out to be, pulling out one of the most impressive power runs of the series and at 21 becoming the youngest winner ever (LOVE). A rough start, but not a bad follow-up to the spring’s unbelievable season.

Up next is what sounds like a truly awesome idea: Redemption Island. February marks the premiere of “the biggest twist in Survivor history” (in theory, although I would argue that the hidden immunity idols take the cake). Once a castaway is voted off the island, they’ll be taken to another island where they’ll live in isolation. The next castoff will join them, briefly. Then comes the fight to the death (read: physical challenge + puzzle), winner gets to stay on redemption island to fight the next castoff, loser leaves the game for good. The person left on redemption island gets back into the game somehow (though when is still unknown, if I understand correctly). It sounds interesting, great even. Here’s hoping it works (though I think it should be a one-off experiment to come back every once in awhile, not an every-season thing). In the meantime, I’m going to bask in the glory of Fabio’s fabulous win and count down the days until he’s offered a spot on the next all-star season.