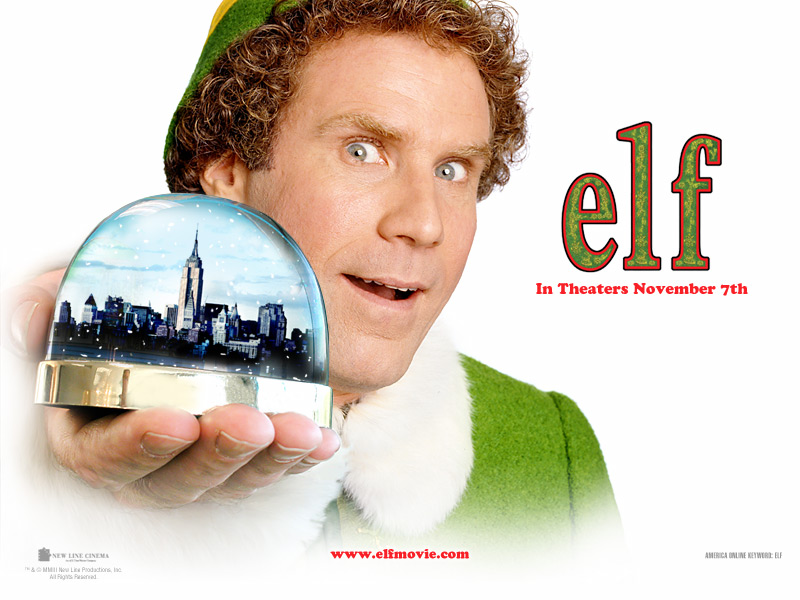 The second movie in our holiday-viewing docket is Elf, another new classic. At once heartfelt and hilarious, Elf consciously conjures up a childish sense of wonder while playing to an audience that ranges from the littlest tykes to middle aged Will Ferrell fans.

The story of Buddy the 6+ ft elf is a unique one within the Christmas movie pantheon: Buddy was abandoned as an orphan, accidentally stowed away on a bag to the North Pole, and was raised among Santa and his toy making ilk. When he grows up to be Will Ferrell, his ungainly size and general non-elfness make him realize what he should have known all along: he’s not an elf, he’s a human, and he has a non-elfen father on the Naughty List in New York City.

After a fantastic sequence in which Will Ferrell wanders through a claymation version of the North Pole in a nod to classic Christmas fare, Buddy makes it to NYC, where he’s just as much of a misfit among the work-a-day cynics who populate there. He works at Gimbels, befriends his fellow “elf” (a disarmingly blond Zooey Deschanel) and worms his way into his father’s family’s hearts, despite the fact that he seems like a tights-wearing psychopath. But when the general lack-of-belief causes Santa to crash land in the middle of Central Park, everyone’s belief is really put to the test.

In the end, Elf is more about how much fun it is to be a kid than it is even about Christmas. It uses the santa metaphor to make the popular argument that strangling our inner child probably isn’t the best way to go through life. It’s Will Ferrell’s complete conviction with this idea that makes Elf so much fun. It’s a gleeful film, filled with moments, both tiny and oversized, of hilarity.