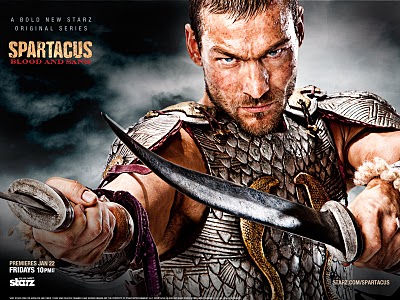 Spartacus: Blood and Sand arrived on DVD a couple weeks ago. And though the Starz series has had some tumultuous times (star Andy Witfield was diagnosed with cancer and had to back out of season 2), it is set to return strong with a prequel in January. In the meantime, pick up season one on DVD, relive the series and dive into the special features:
Spartacus is a great series. It really has a different feel from most tv shows. The aim of the series is to create a televisual graphic novel, which they achieve brilliantly with their use of green screen and fake blood. The effect is amazing and probably the best feature of the series
The DVD special features offer the viewer a good understanding of how the show got started, the vision of the creators and how it was executed. There’s a good focus on the intent of the series: not to create a historically accurate depiction of the legend of Spartacus but to make a great and compelling story, which allowed them to play with facts and really develop relationships between the characters. The special features also give a great sense of how fun it was on set: “gladiator boot camp” is definitely a highlight.  There’s also an endearing featurette on the filming of Spartacus and Varro in the sewage pit, it’s priceless. A little more detail on the period aspect of the show would have been a nice addition, but the special features that are there are great.
Now, if only Andy Witfield were healthy so we could see the resolution of that crazy cliffhanger!