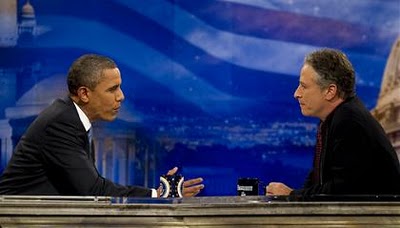 Tonight was an historic night for The Daily Show. It was the first time a sitting president has ever been on the show. Anticipation was high and with the faux newsman’s sure-to-be-a-hit rally coming up on Saturday and midterm elections right around the corner, now was the time to do it.

The two men- both brilliant, both powerful, both liberal, both idealistic, both grounded, both funny and loaded with assured mutual respect- seemed like the perfect matchup to put a little fire in the democratic midterm charge.

Is it weird then that the whole ordeal felt really sort of awkward?

Stewart, a uniquely at-ease interviewer who I’ve seen conquered only once in his career (by torture advocate John Yoo) was understandably tentative in dealing with the President. Usually, Stewart is in his studio, in his city and the guest, no matter who they are, is intrinsically aware that they’re on his turf. He sets the tone and the interview moves on from there. But Obama’s his commander in chief, such things blur the lines a little bit. Stewart was throwing soft balls all night, and doing that uneasy thing he does when he doesn’t want to interrupt the guest and doesn’t quite know if it’s okay to make a joke. He started off strong with the overarching question of “Are we the people we were waiting for?”, but his desperation not to step on toes undermined what makes him great (not that I really blame him one bit for it, come on, it was Obama!)

But then again, Obama wasn’t on his A game either I didn’t think. The president, eloquent as always, seemed self-consciously concerned with being heard. He did the “please let me finish my point” thing that Stewart’s most nervous guests do, you know the sheltered author ones who’ve never seen an episode of the show. He seemed almost scared of the oft-lethal pundit, too scared to notice the caution on the other side of the table. He was defensive when he should have been confident.

Perhaps it was a classic case of the smart kid in school who never developed study skills. You’re hard pressed to find someone in this day and age who can go toe-to-toe with either of these guys; maybe they’d never fought someone their own size before, they didn’t know how to take a hit. They both did, after all, make a couple pretty good points considering neither of them was really owning their potential.

What should have been an inspiring debate between two of the greatest liberal minds of the century, (who essentially agree on most points, I might add), turned into an awkward softball conversation conducted almost entirely on tiptoe. Again, I get it, I would have been intimidated too, no matter which of them I was going up against. But tonight was the time for liberal lions, not pussy cats.