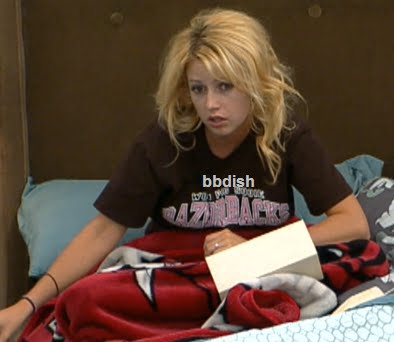 It’s disappointing to admit that this season’s Big Brother is barely keeping my attention. There have been a few ups and downs but overall the strategy is lackluster, the contestants are a bit boring, and a good amount of really dumb decisions are being made. I will say one thing though: for the first time in a very very long while it appears as though friendship is running the game.

Ragan said it best the other night after his eviction, this is a season where the contestants are more concerned about loyalty than anything else. Lane’s friendship with Britney overpowered his early alliance with The Brigade as he continues to bring her closer to the finale. Similarly, Lane ignored the surprisingly persuasive strategy talk from Ragan in favor of keeping his buddy Hayden in the house. The only contestant who threw loyalty out the window was Matt when he attempted to get Ragan put up on the block, and his eviction was a direct result of Britney punishing his disloyalty. Since when do people NOT back stab their friendships and alliances in this house? For such an immature group of people who pick on one another nonstop (cough Ragan and Britney cough) it’s surprising to see how moral they actual are.

So our little hamsters are slowly dwindling and we’re down to four. With the HOH being crowned tonight, we’ll be one step closer to next weeks finale. If the start of the competition is any indication of who will be winning, expect to see Hayden take HOH once again and put of Lane and Britney. The nominations really don’t matter since the veto player holds all the power this week. So who will win? More importantly, who deserves to win? Or does anyone even deserve it? Here’s my take on the 4 remaining contestants and a countdown of the most deserving:

4/ Enzo- Aside from winning veto last week, Enzo’s physical gamesmanship has been the joke of the season. He may have attempted the social game by befriending everyone and staying out of the drama, but this attitude has already been called out as a poor strategy. Nobody buys that Enzo is really “every one’s friend” and his feigned closeness with Brenchel will most likely lose him a few votes if he makes the finale. Add in the fact that Lane will evict Enzo long before he tosses out Hayden, and you have yourself a done deal. Sorry Enzo but it seems like your time in the house is almost out.
But will he win?: No. The only possible shot he has at taking home the half a million is if he somehow ends up in the final two with Britney. In that case, he will likely get votes from at least Brenchel and Hayden so he could pull out a victory. In that scenario, Britney would probably get Ragan, Kathy, and Lane’s vote with the deciding vote being Matt.

3/ Lane- The third and second spots are somewhat interchangeable but Lane might be making one fatal move in this game. For starters, Lane began playing just a few weeks ago. His overall competitions are not that great but when push comes to shove he can pull out a win here and there. Lane biggest mistake in the house is not reconciling his desire to take Britney to the finale with his strategy. It’s a done deal that Lane will evict Hayden over Britney if given the chance (based on his diary room confessions), so he should have taken every step to ensure that. Ragan had proved to be an honest competitor prior to his eviction, so he clearly would have protected Lane and Britney going into the finals (and I’d wager Ragan thought he was smart enough to win the final HOH over both of them thus ensuring his own safety). If Lane had forced a tie breaker and sent his BF in the house packing, then he would have ensured a win for his side during the HOH and probably even a win for his side on the Veto (since there only competition would be Enzo). The odds seem so ridiculously in his favor that this was a huge mistake on Lane’s part. If you want to take the girl to the end, you keep the guy who wants here there too!
But will he win: Depends on who he potentially takes to the bottom two. If it’s up to Lane, he will take Britney in which case he might. Although, even then I could see some of Britney’s enemies voting for her simply because she played a better overall game. If he’s with Enzo in the end, he wins. If he ends up there with Hayden, he has no shot.

2/ Hayden- There isn’t much to be said about Hayden’s strategy because he really doesn’t have any. Hayden deserves to win only because he wins a good amount of competitions and he played the social game to perfection. Part of this game has always been lying and cheating your way to the end but another part is thinking long term and befriending everyone to play only for the cotes. From day one it seems like Hayden has played for votes only and even putting up Brenchel during week one didn’t create a target for himself. Clearly, he knows how to schmooze the best of them. The problem with Hayden is that nobody knows where his true loyalty lies. He seems to be Brigade all the way but, if you follow the live feeds, he also made a final three pact with Britney and Lane. Regardless of what happens this week, I can’t see Hayden leaving and that means he’s doing something right.
But will he win: Absolutely. If I had to bet money right now, I would be all in on Hayden. Enzo is officially targeting Britney. Lane wants Enzo out so his two besties will take him to the end. Britney will probably do whatever Lane wants, but she may be the only threat to Hayden’s eviction this week. If Britney loses POV, Hayden will stay till the final three. He has a pretty good chance of winning the final HOH and if so, the game is his to lose.

1/ Britney- Really the other three contestants don’t come close to this southern belle. Sure she may have allied herself with Lane, but Britney is the only non-Brigade member to make the finals. She somehow weaseled her way into arguable the tightest alliance in Big Brother history. On top of that, Britney has won several vetoes and an HOH. The contestants will see her eviction of Matt as a game changing move, even though it was influenced heavily by the three boys. Britney can do one thing that the other boys can’t, and that’s portraying herself as a strong contender in this game.
But will she win: Probably not. If she makes the finals with Hayden she’s done. Lane and Enzo she should be able to beat but it depends on how bitter the jury is. If they can accept their own defeat in the house, they should give her the win since she clearly outplayed them all. Sadly, this is not likely since the jury is full of over sized ego’s who will be seeking revenge until the last minute. Britney will likely lose HOH this week so her only real shot is for herself or Lane to win veto. It’s a fifty-fifty shot, but the odds might be slightly in their favor with Enzo’s track record.