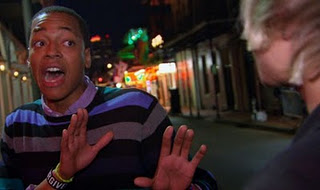 Whether or not reality television is in fact “real” has been a major cause of concern for critics since the phenomena began. As a constant watcher and frequent enjoyer of the reality genre, I typically found myself not caring one way or another. The reason for this is mostly that reality TV has broadened to focus mainly on competition shows. These prize-based games are clearly not realistic in the sense that the stars are in at all normal situations. Instead, the only reality lies in the unscripted antics of the contestants/stars and the lack of interruption on the part of production. Lately there have been a plethora of shows disregarding the unscripted “rule” of reality television (here’s looking at you The Hills). Regardless, I’ve still held on to the the belief that most shows will not let production interfere with the outcome (or they at least try to keep up the illusion). I’ve been largely impressed by this.

This week, my opinions have changed. Two shows in particular have fueled some much needed debate over when it is or is not okay for producers to interfere. These two shows are The Real World and Big Brother.

It’s no secret that The Real World fell off its path years ago when the roommates stopped working together, the show added one more to their number, and casting directors stopped looking for diversity but rather focused on the typical party animals. Nevertheless, it’s still a mildly enjoyable series which films honest interactions between a group of strangers thrown into a gorgeous house. This week, however, the show lost a lot of my respect. The main strife this season is between the straight, somewhat homophobic, hairstylist Ryan and the gay, somewhat slutty, Preston. The two have bickered and apologized more times than I can count at this point. But things took a turn for the worse when Ryan secretly wiped Preston’s cigarettes on his butt and Preston dipped Ryan’s toothbrush in the toilet. Now, if you recall years and years back, this toothbrush meets toilet scenario was first performed by Shannon on Big Brother season 2. The producers wisely told Shannon to admit her prank and throw away the toothbrush for health reasons. The interference was broadcast on the show and while it may have been solely done to create drama, the producers at least let viewers know that it was them who interfered. Well, The Real World did no such thing. Instead, Ryan tells his roommates that he heard “rumors” about the incident yet he announces these supposed rumors to every single roommate. Not once in the confessionals or on camera is the audience given any inclination as to who actually spilled the beans. My guess? Production. For a show that loves drama and gossip to completely edit out a scene which causes the entire fight would be unheard of. They clearly should have taken a cue from Big Brother and at least blamed health precautions as a reason to interfere with the “reality” of the situation.

Now, Big Brother has been wise in the past, the toothbrush incident being a clear example, but if you are anyone who knows anything about the online community that follows the live feeds, you would know that for years now executive producer Allison Grodner has been plagued with accusations of interfering with the outcome of her show. In the past, this has always been pure speculation and in my opinion most of the house guests’ moves seemed legitimate. This week, however, things changed. If you just watch the show, not the feeds, you would think that Kristen spread the rumors regarding the Brigade alliance. But if you read the online feeds, it would seem that both Brittney and Ragan first heard of a possible male alliance in their Diary Room interviews. It makes sense that in a season filled with lackluster drama, the producers would want the secret alliance to eventually surface. One thing this season lacks is a split house. In the past few years, there have always been two sides fighting against one another; this season it’s a whole house against one couple. That barely makes for good television and the second Brendon and Rachel lose HOH the drama is gone (he may have lost it already after this week’s not-yet-aired endurance competition).

So what exactly makes Big Brother a much smarter show than The Real World? It’s all about the editing. If both of these shows did interfere, the former clearly covered its tracks. By focusing on Kristen’s suspicions about the Brigade, Big Brother made it seem as though this was the first time anyone had heard of an all-male alliance. The Real World on the other hand let some sloppy editing ruin the illusion of reality television.

Consequently, to all you reality TV execs out there: while the audience generally knows nothing is 100% real, please do your best to cover up any interferences with smart editing and we’ll be none the wiser.